I've used the above treat as a stream-side bribe to gain access to a private stretch of the West Walker River in Nevada, in the Humbug valley along-side the banks of Yellow Creek, on the shores of  the Sierra's Martis and Miltion lakes, on the McCloud, Upper Sac and on the Truckee River...with a huge granite rock serving as a table top. Richard Anderson included the recipe in  a late '90's article in his California Fly Fisher magazine article enumerating unique, outdoor lunches. My nephew Mark of Weed CA introduced me to this meal.

This special stream-side cuisine is an ideal finger-food to add variety and drama to one's fly fishing excursions. What you do is sprinkle various ingredients into a leaf of romaine lettuce, with a dollop of plum sauce. You can mix and match to your heart's content, taste preferences or gastronomical imagination.

Fill a 6-section cupcake tin, one ingredient to each compartment, and cover tightly with plastic-wrap. Or, if lucky to find, a tightly-sealed Tupperware-type container. Make it as portable as possible; carried in your vest or pack. Put the lettuce in a rigid container to prevent bruised leaves, you want them fresh and crisp; plum sauce separately.

Stream-side, each person selects a leaf of Romaine, places desired ingredients on the leaf, dribbles the concoction with plum sauce; then rolls it up and eats it taco-style. With each bite and each chew, a different  sensation is released. This meal is a precursor of what, in current culinary circles, is called "fusion".

Note: This meal is intended for figures, but you can use small plastics spoons.

We'll take the Snow...and the hot bite at Pyramid Lake

Last evening we received 8" of snow at my place at 6500' elevation. For sure it is bit too late, but the trout will cherish ever bit of water they get, the more the better through the full-month of April.

The last weather system has up-ticked the totals for the year. Seventeen (17) weather sites in both the Lake Tahoe and Truckee River regions now stand at 38% of normal snow-pack and 57% of normal annual precipitation. Not good, but a lot better than the numbers of a couple of weeks ago.

We have been wetting a line though. Most especially across the border at Pyramid Lake. This body of water has been producing both numbers and size of Lahontan Cutthroat during the last month. I personally have experienced a couple of 10+ sessions...which are decent numbers for me. Sized 20"-25" of both Summit and Pilot strain fish have been eating whether one is indicator fishing or retrieving. On March 19, Jonny B had a 30 fish session, along with Rob Anderson's 20 and my lower-count of 10. We had on and lost the coveted 10 pound-plus trophies we all seek. 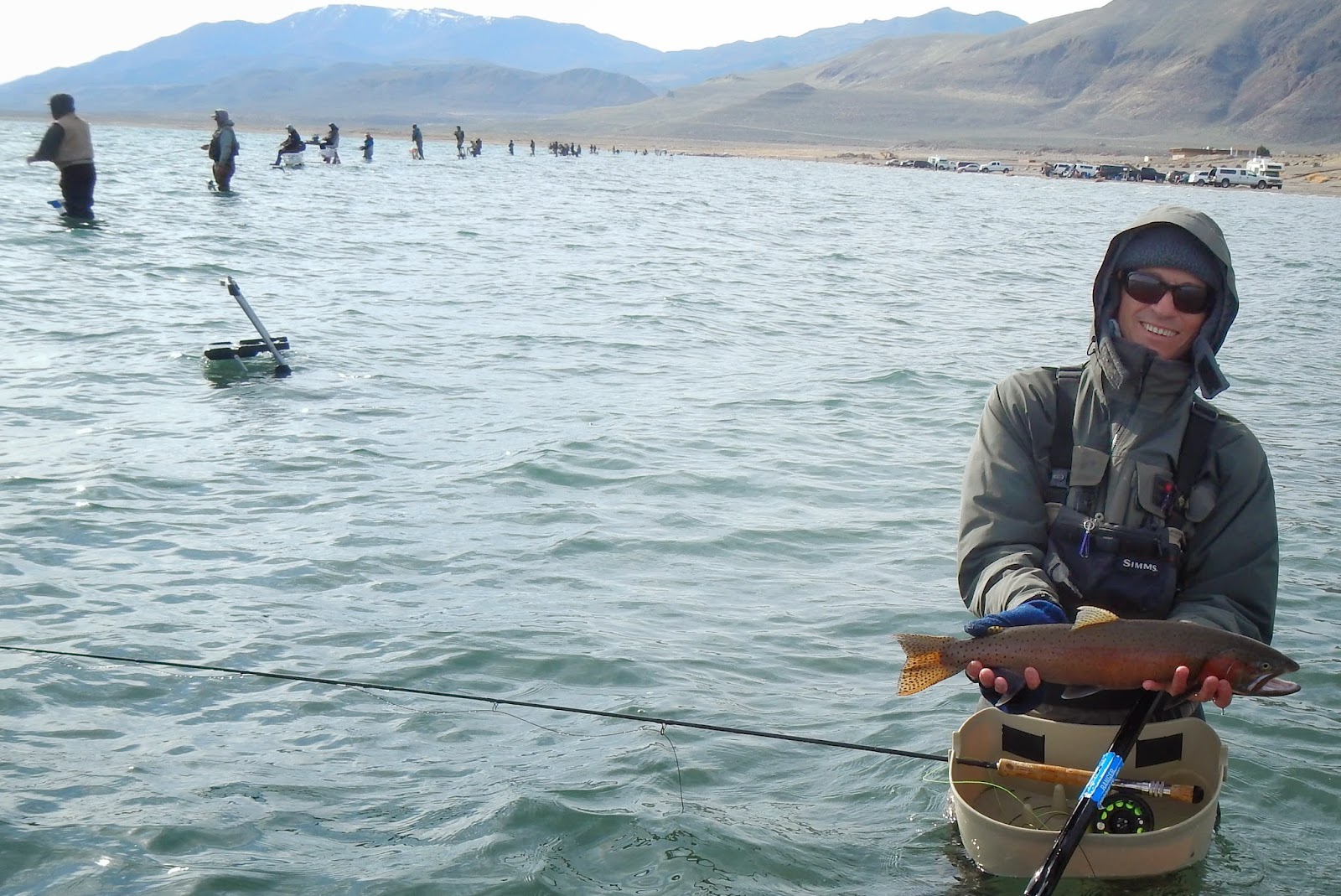 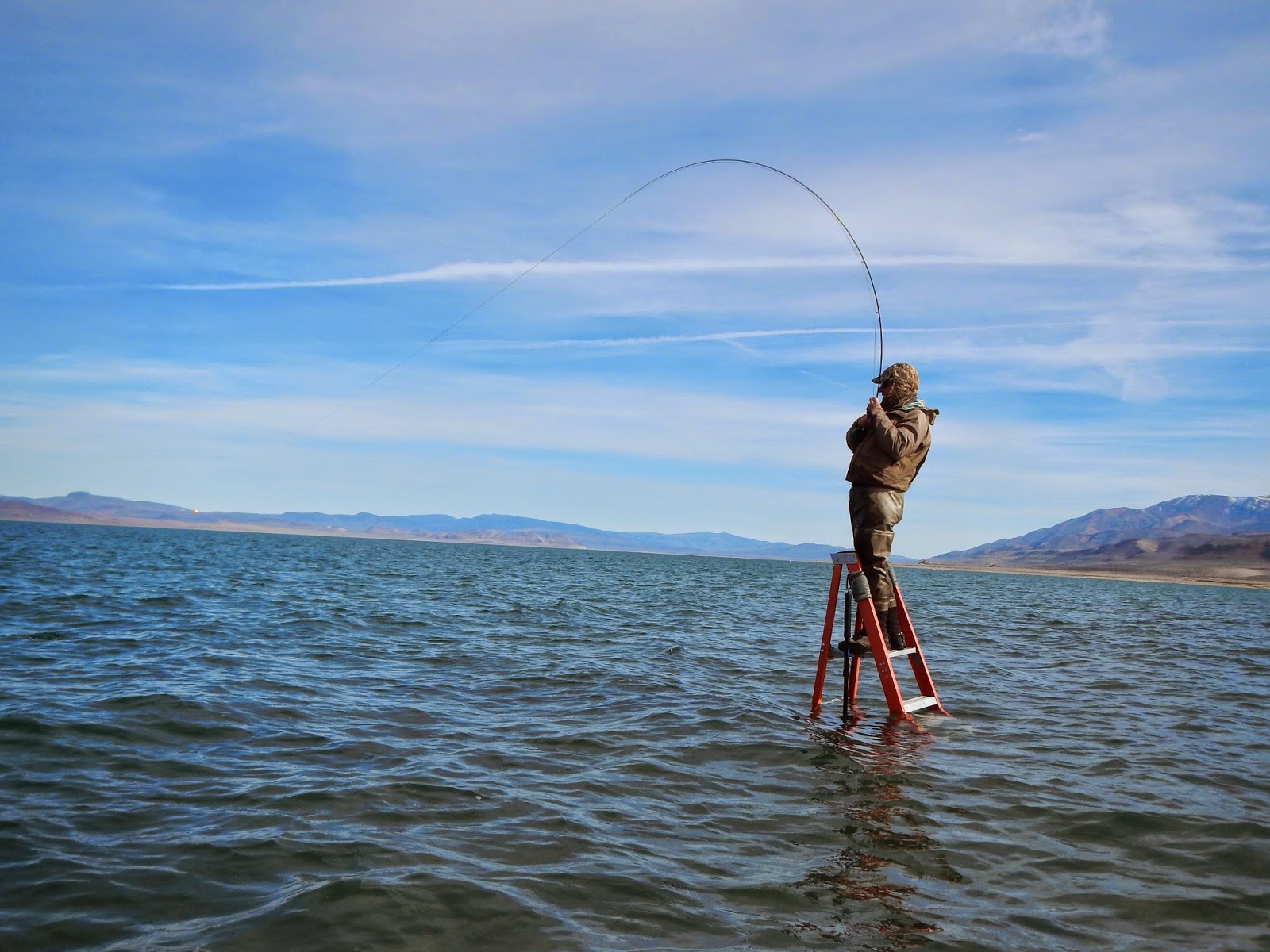 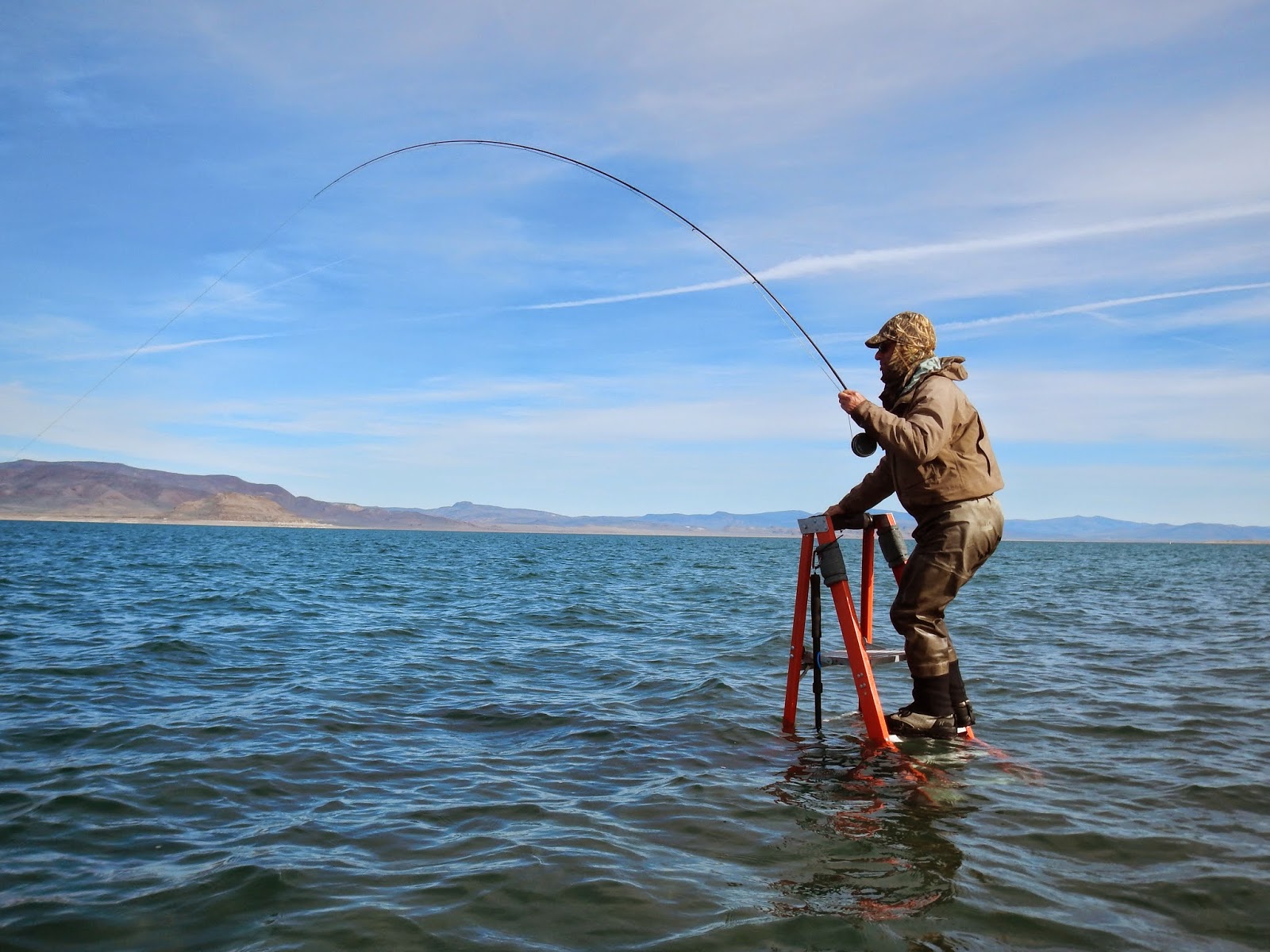 ...a "cookie-cutter" Summit fish
Locally on the BT and LT, Rainbows to 19" and Browns to 22" have been netted. Sub-surface fishing is the best producer, with surface activity being a distant second method. Water temps are still a factor on th big river; for both energizing the trout's feeding metabolisms and encouraging more prolific aquatic bug emergences. 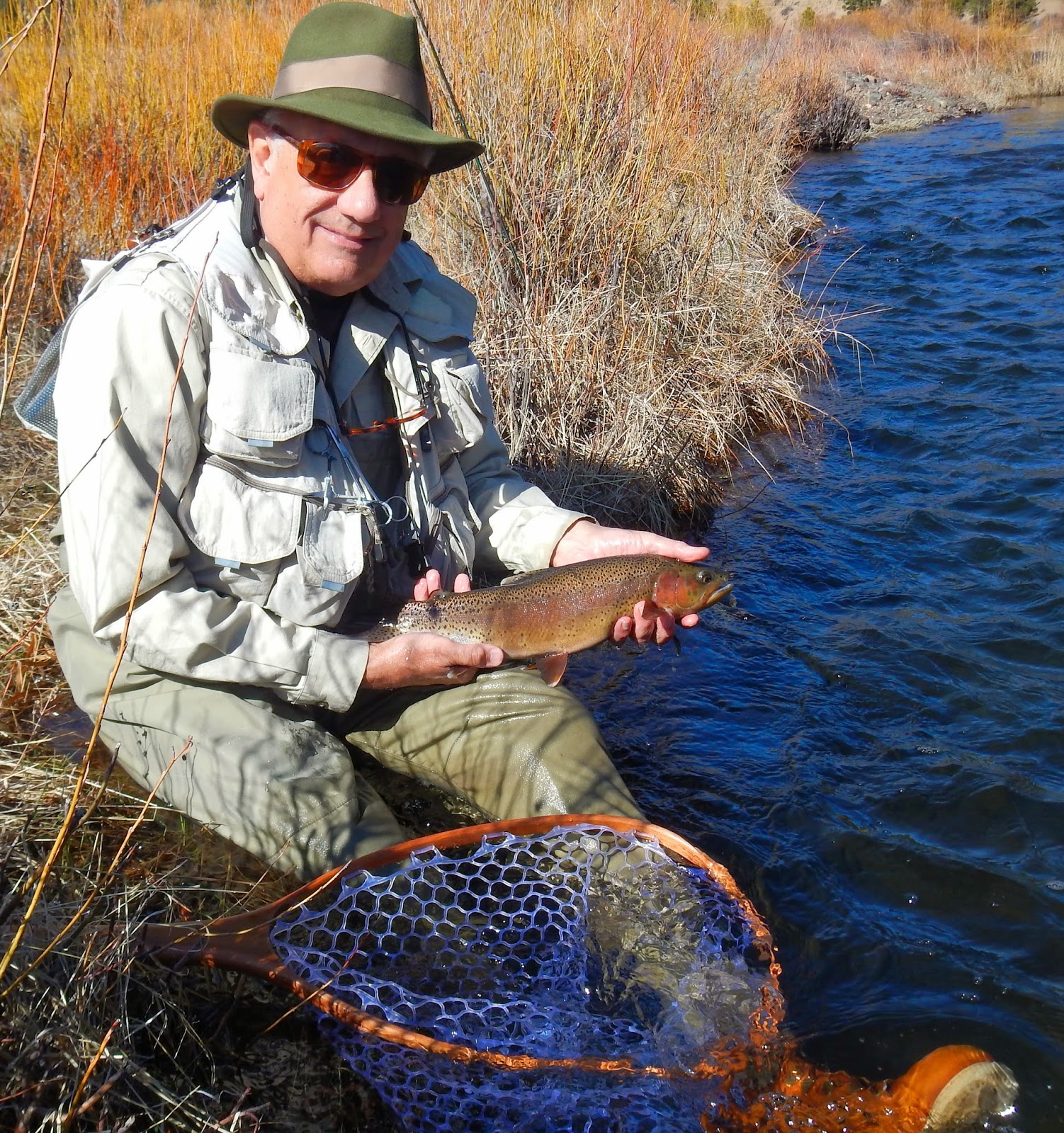 da Professor with an LT 'Bow 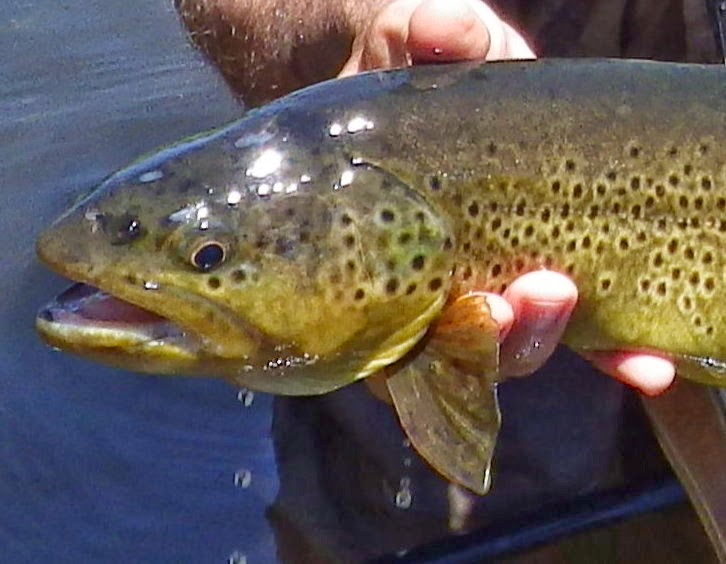 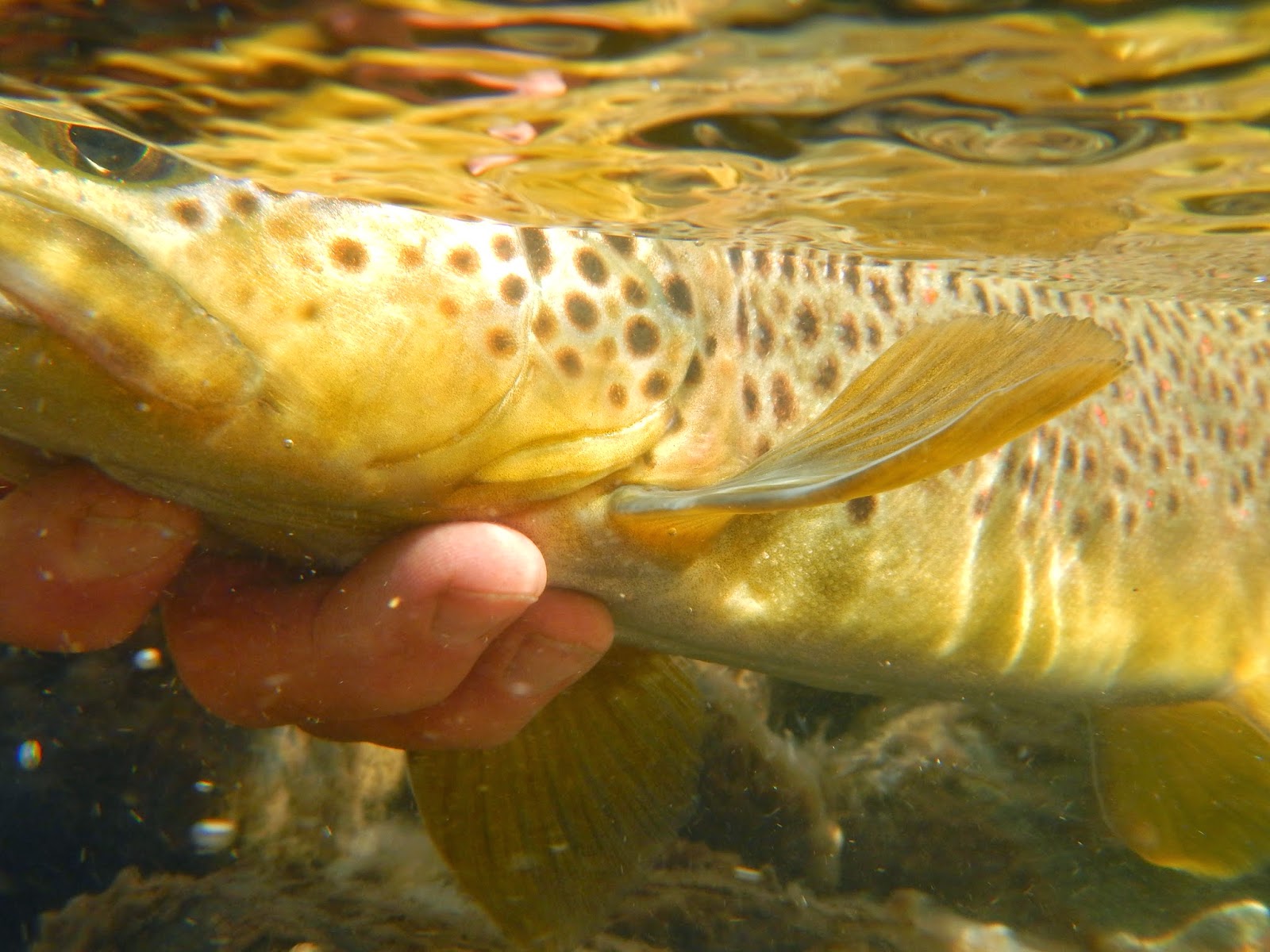 Who was newly incorporated Truckee's first mayor in 1993
Posted by Frank R. Pisciotta at 2:02 AM No comments:

A few days ago we saw a noticeable orange slash below the lower-lip (I forget its Latin name) of a RainBow; suggesting a hybrid, wild trout. Then the next day we encounter  a unique Brown with both large, red and black spots...with silvery and blueish halos.

...click-on to view full image
Is this coloration common? Personally I do not see many like this. 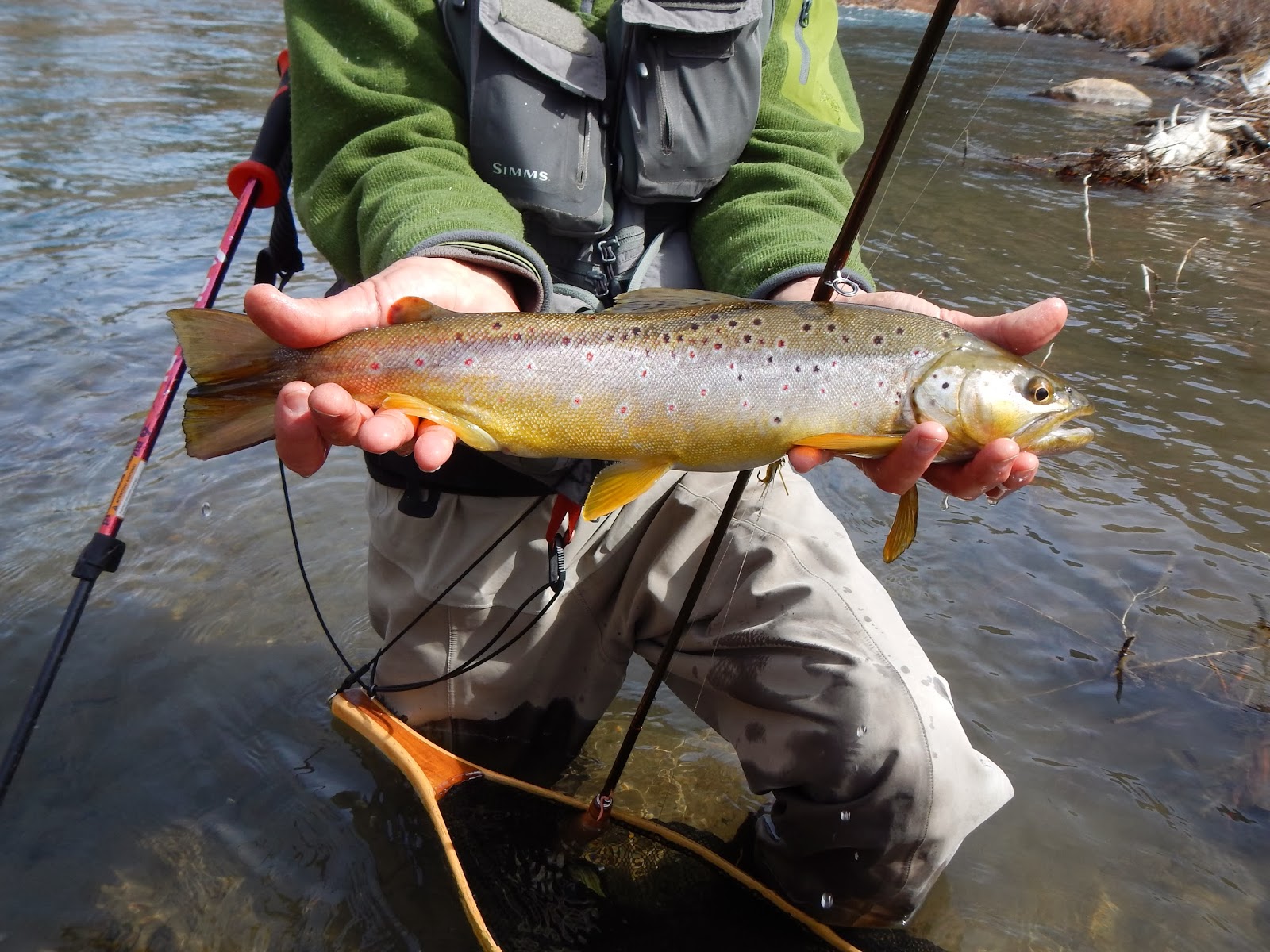 And then in the same tail-out...a more common-colored brown eats. 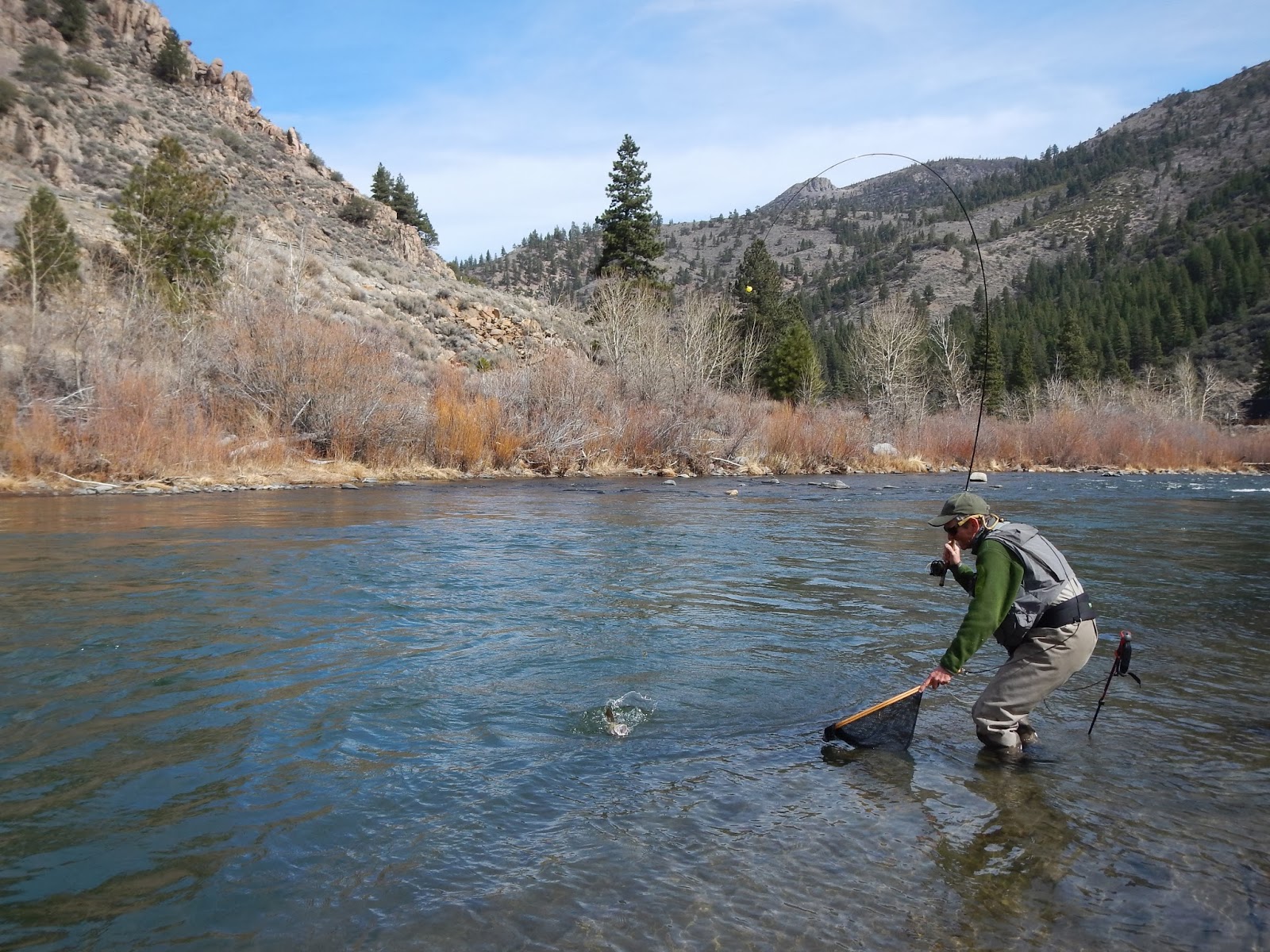 Posted by Frank R. Pisciotta at 9:44 PM No comments:

What year was the town of Truckee incorporated?
Posted by Frank R. Pisciotta at 1:59 PM No comments:

OK, I'm projecting the season 6+- weeks ahead of a "normal" season.
Granted, March has brought us some desired precipitation, but, we'd surely like a lot more...to be even close to normal. As of today's date in the Truckee Basin watershed (8 measurement sites at elevations from 6456' to 8801') the numbers reflect 33% of average snow-pack and 54% of total precipitation for the year. So, what can we anticipate?
FOR SURE:
1---Summer Doldrums by early July?...yikes!
2---April and May angling conditions similar to "normal" June/July
3---Tailwaters throughout California will be a zoo! 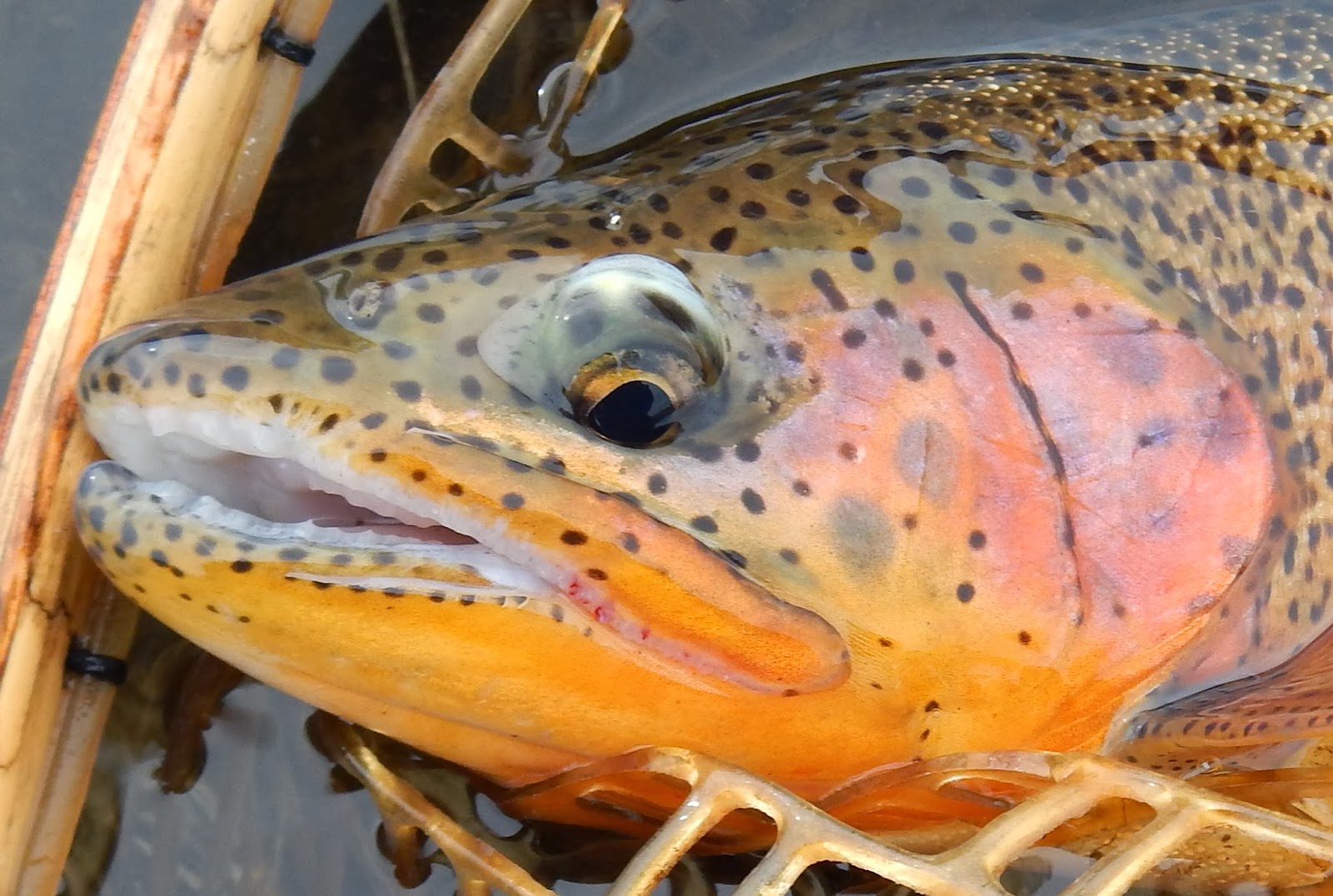 ...dotted lips (move the screen around to view exceptional colors)
We've been "head-hunting" on both sides of the border. Effective surface patterns have been  #20 Griffith's Gnat, #18 Baetis Hackle-Stacker and #16 Royal Wulffs; duping trout to 19". Adults seen on the water are BWO's (tons of 'em in Nevada!), an occasional Skwala Stonefly and midges. 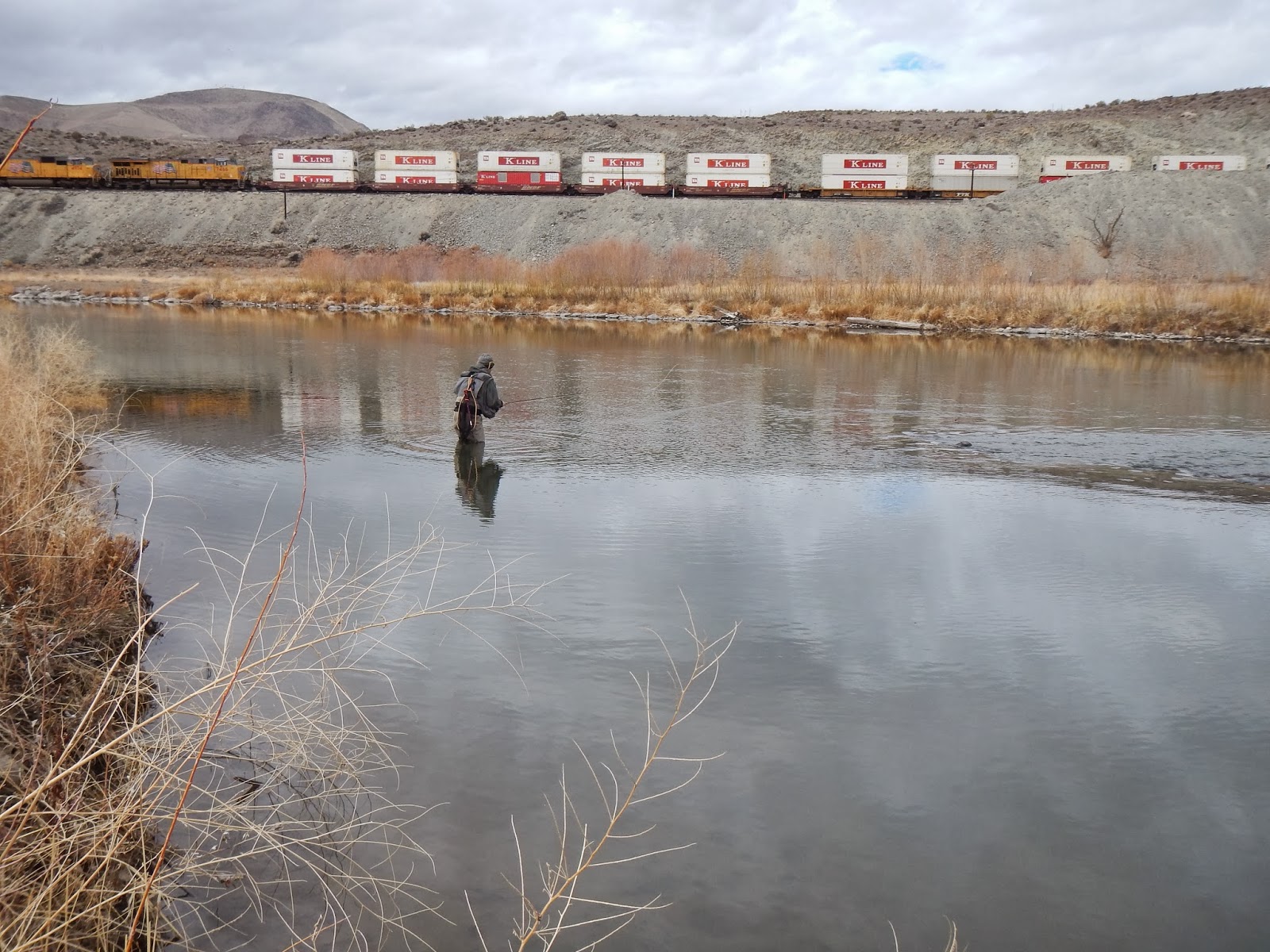 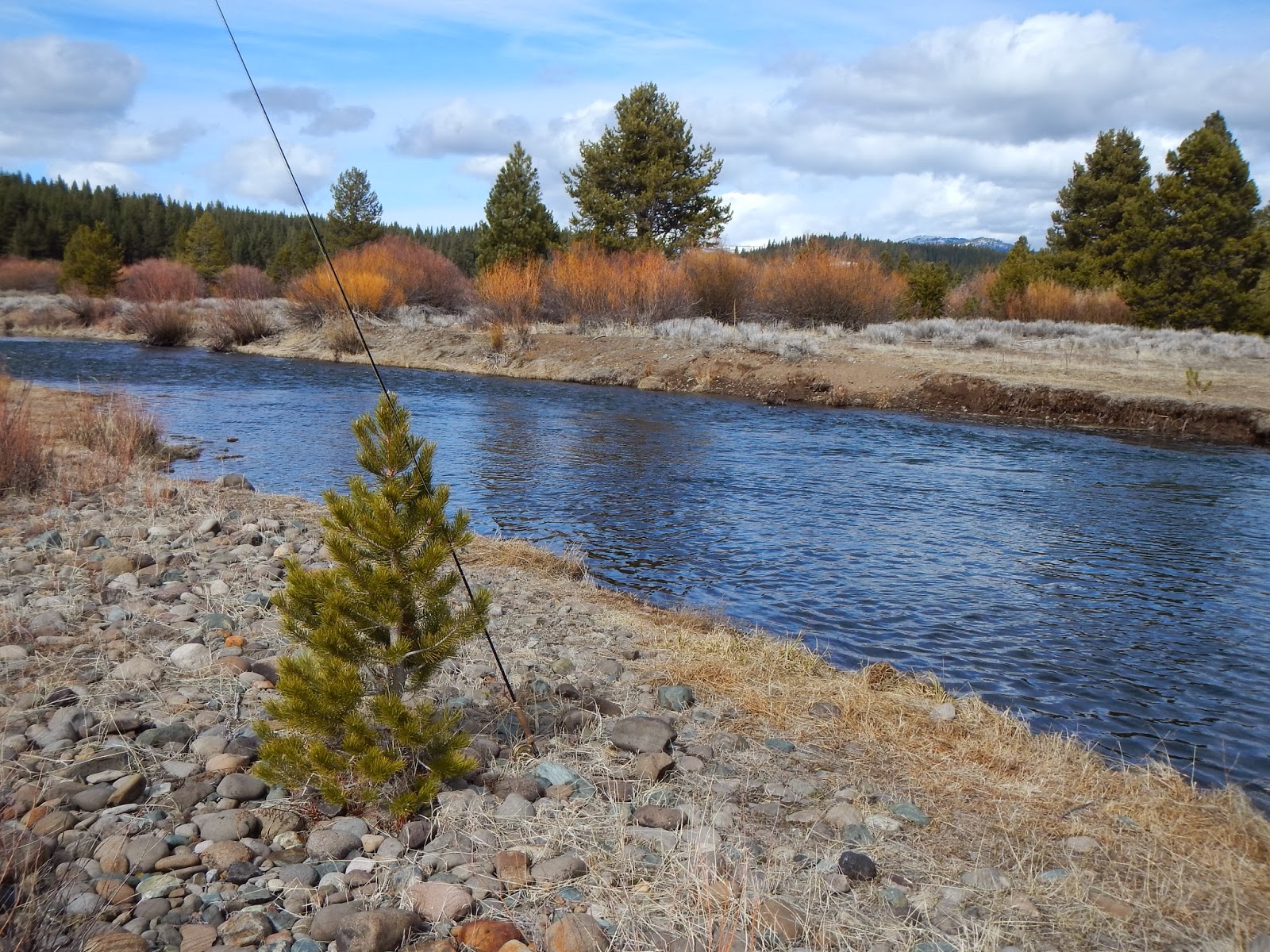 In the absence of showing fish and wanting more tugs of bigger fish; go down, near the bottom, and use lead..."tight-lining" or using indicators. Water temps are still low on the BT, mid to high '40's, so feeders are not moving much. You have to hit them on their snouts while fishing "low & slow". Largest trout this week has been a 22"-23"  trout imaged below. Biggest Brown has been 19" with a larger one lost on a high aerial.
Effective patterns have been #18 FBPT, #16 March Brown nymphs,  and #10 Flesh Juans. 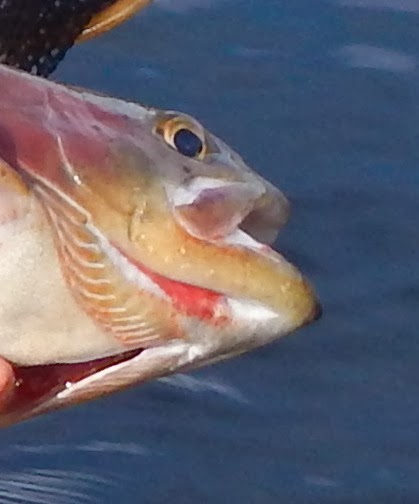 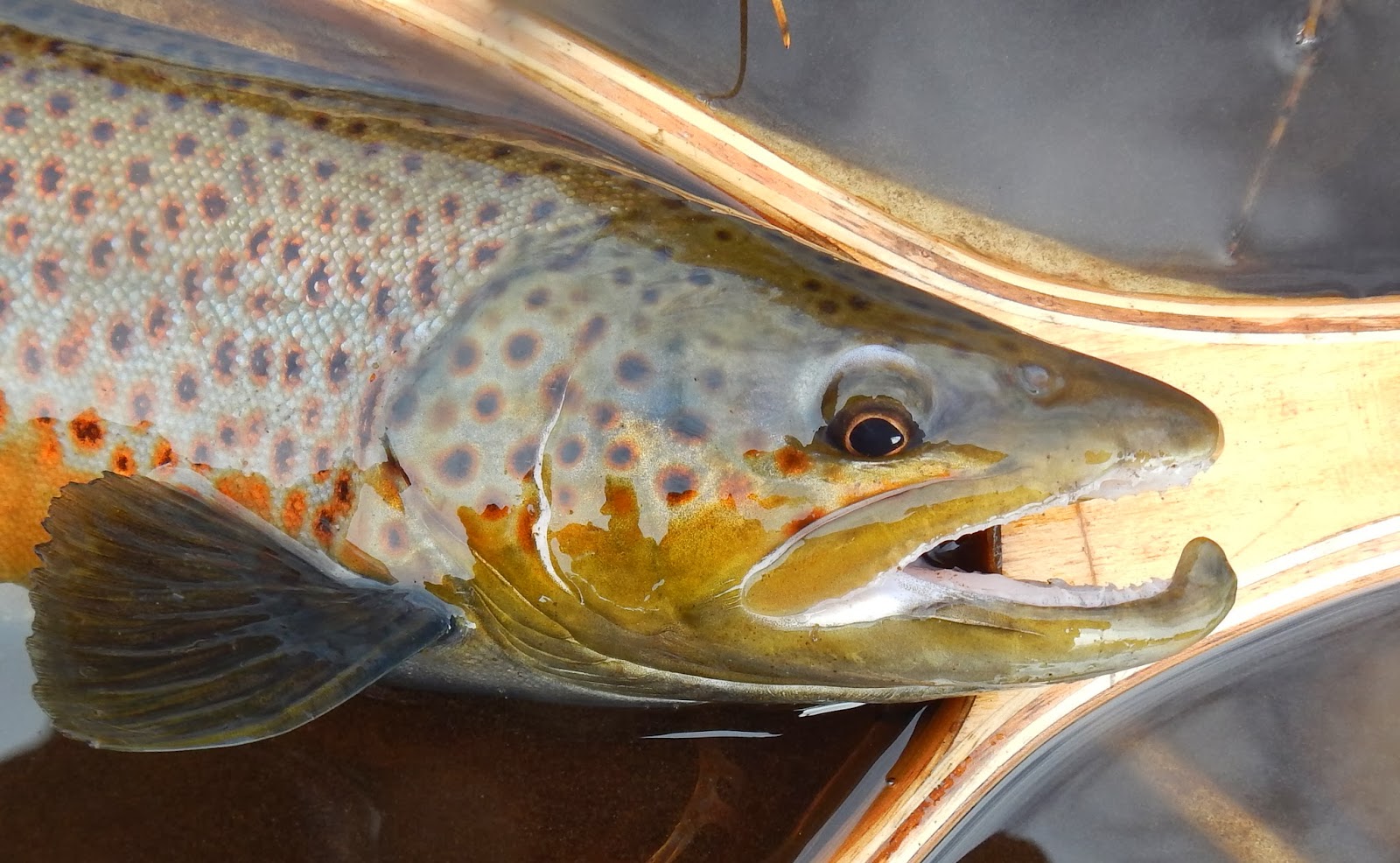 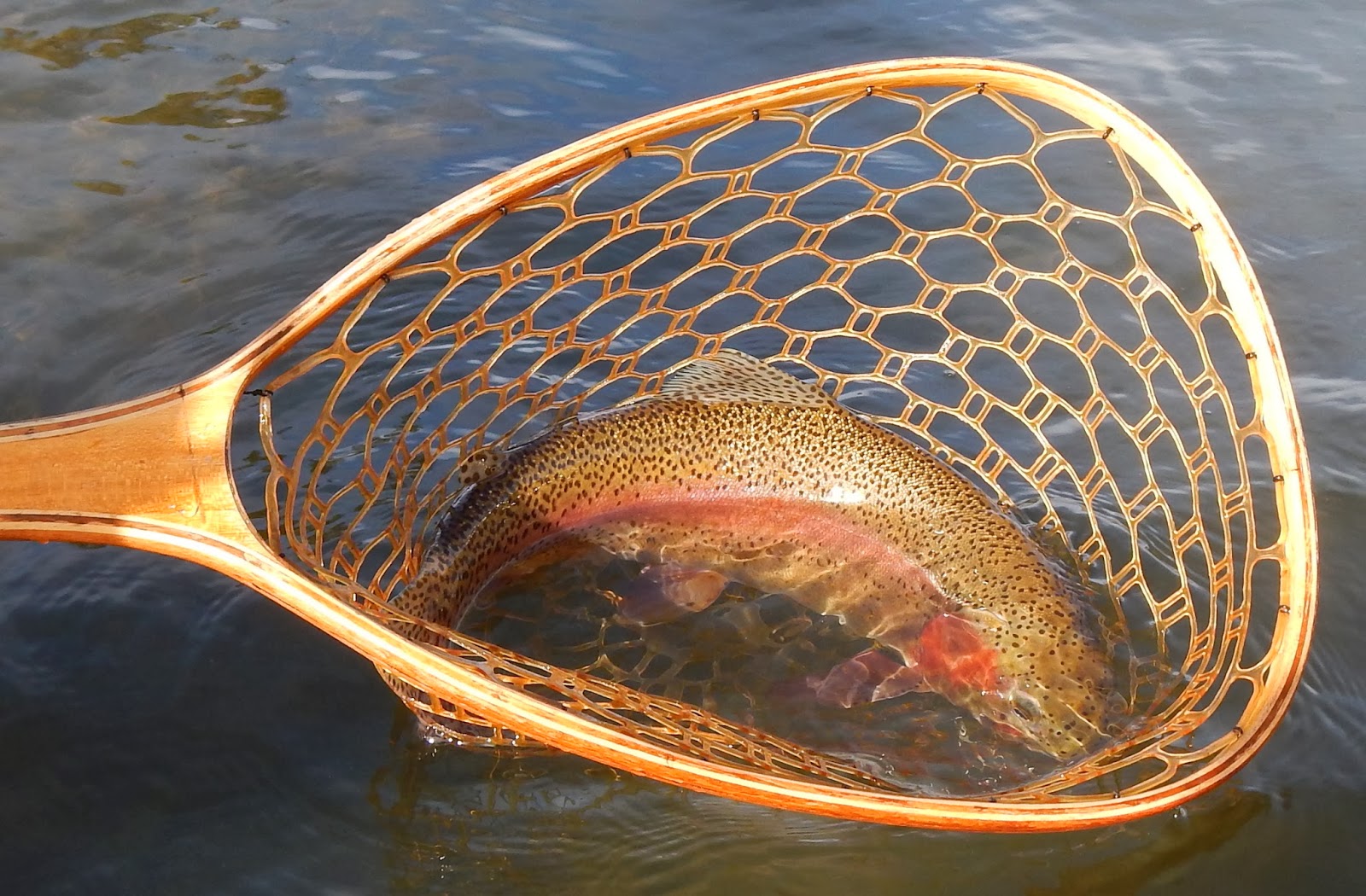 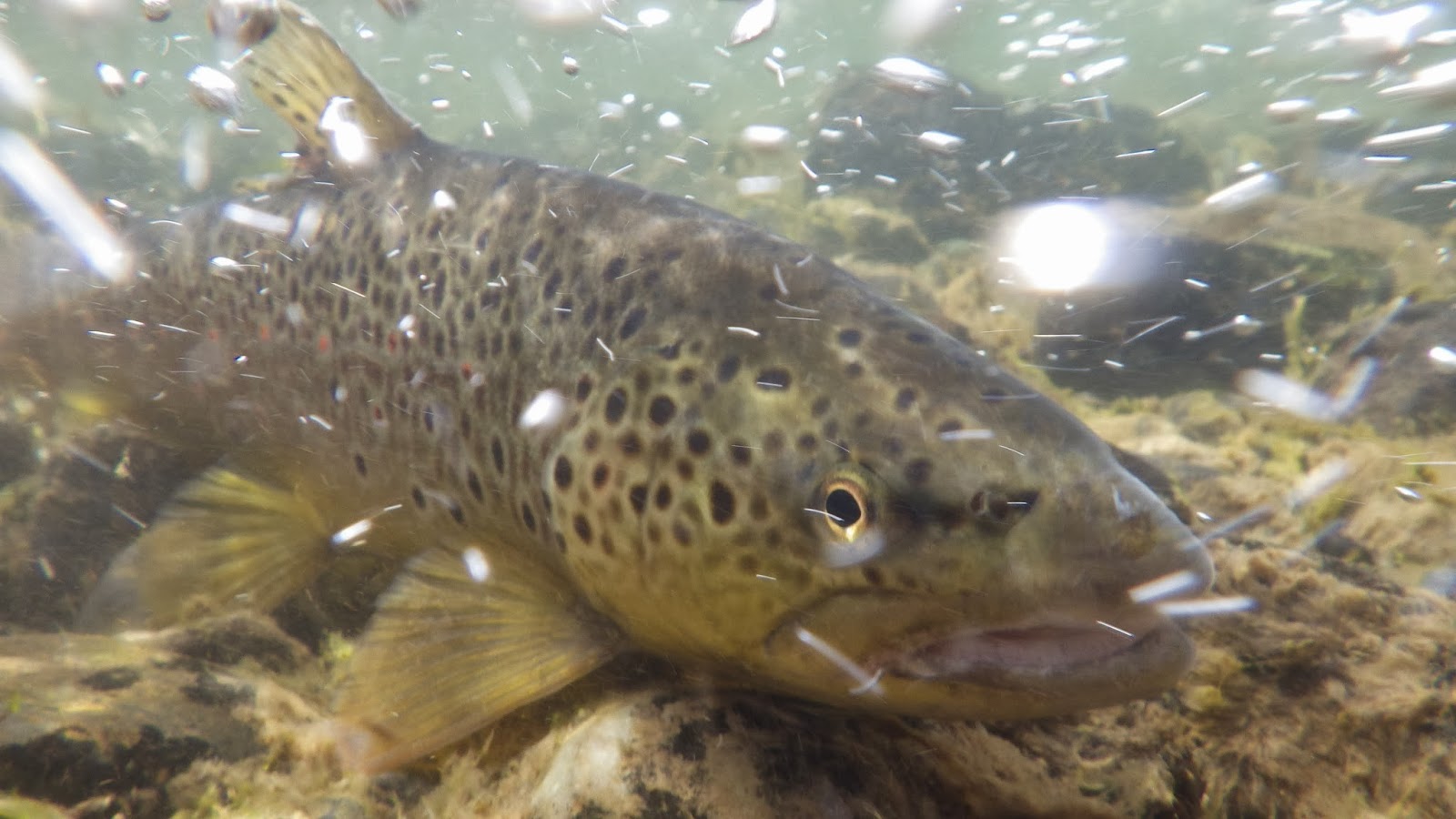 Remember, conditions on the Cali-side of the border, will be earlier than usual. And that should be considered when you plan your Sierra angling trip this season. The hope is that we get way above normal precipitation for the remainder of March and through April.
Posted by Frank R. Pisciotta at 11:45 PM No comments: