Plus, I inadvertently deleted my post of October 16, 2011*....an E-Quickie Fishing Update.
Well, I'm still back in Virginia having had a wonderful extended Thanksgiving with close friends. We're right on the Rappahannock River...beachfront...one of the four (4) rivers of the "Northern Neck" of Chesapeake Bay. I was going to download some images, but, time is an issue since I'm using a computer that is being used constantly. When I get to California I may post some images of interest. 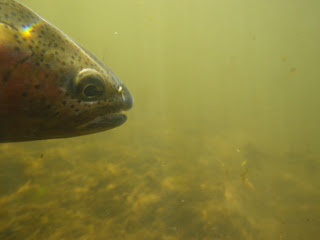 As for the fly fishing in the Truckee area, it remained productive prior to my departure. The flows on both the BT and LT were very friendly; all the way to the CA/NV stateline. Both the Browns & RainBows continued eating; sensing that winter is approaching so they are bulking-up and feeding aggressively. Streamers are duping the big guys and nymphing has been the most consistent method; producing Browns to 26" and RB's to 20". On the BT the lower flows above the Boca inflow, dry/droppers were fooling mostly RB's in the 8"-12" range with an occassional brown to 13".
.
Bugs being observed are BWO's, Little Olive Stones, October Caddisand micro-caddis. Producing flies have been attractor down-wings(#6-10), #14-18, "generics" (BHFBPT, HaresEars, Princes), David Foster's original Copper Jacket, size 12 and #18-22 midge larva & pupae (dark...as in black) or Flask-Back WD-40's trailing #14 Flesh Juans. Swinging October Caddis Pupae  some got tugs.

PLEASE, do not harass the Browns that are ON redds. Let them do their thing without being harassed. Some anglers don't seem to get that message. It remains the old "It is legal, but is it ethical?" question. I'm of the opinion there has to be a very high-profile discussion by fishery conservation groups about the ethics of fishing on, through and immediately below redds.

* an excerpt from the deleted post entitled "...the seasons, they are changing": 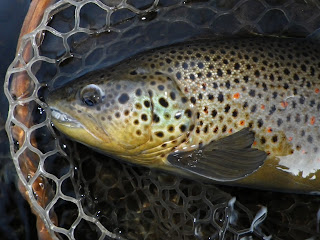 Yes indeed, the weather has changed and we're now starting to wear some of our winter clothing...or at least thinking about it.

We're experiencing progressinvely cooool mornings; as in  ice-in-the-guides...such as a friend just experienced if you get on the water tooooo early. And the fishing has been really pretty good and progressively gets even better.
Flies:  #20-22 Black Midge Pupa and Olive WD-40 Flashbacks, #18 FBPT, #18 Olive ParaDuns, #16 BHFBPT,  #14-16 Flesh Juans,#6-8 Orange Caddis Pupa
Netted Trout: RB's to 19" and Browns to 23". higher proportion of RB's on the BT, with an even mix between Browns & RB's on the LT.  The larger trout are more predictable on the LT.  The BT water produces better numbers, but smaller fish...thus far.
Most Consistant Method: Without question...from my first-hand experience with both clients & myself..indicator nymphing. Use two-fly rigs; big/small with the latter trailing. Anglers using streamers also, but "NetWork" reports seem to reinforce that the deep nymphing is producung the heavier tugs.