The act of walking on freshly fallen snow with felt-bottom wading shoes. The snow accumulates on one's soles so that the angler gains 3"-6" in height via large, attached clumps of intact snow.

We received our first significant amount of snow last Friday, November 13th. It is here to stay and the ski resorts love it. I connected with Pablo and we decided to explore the LT; essentially to see if the Meadow area was still reachable via SUV. I mentioned to him that we'd been seeing some large browns...officially off the redds...so that they were fair play.

Last week he had landed his biggest Brown ever on the BT; a 26" buck with a tapered snout quickly ascending into a humped-back. He was still pumped-up and was anxious to see if he could get another "good one" (...how about great one Pablo!) on the LT. The BT Brown ate one of his CDC Baetis Emerger.

To say that it was a beautiful day with fresh-fallen snow is an understatement... 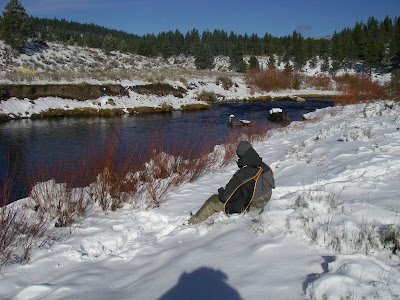 ....looking for a riser
Pablo spotted one working, got into position and got the take...and missed it when he set-up to quickly at the appearance of a good-sized head. I worked the run; probing the shallow bottom (...at 33cfs) and he moved on downstream "head-hunting". There were no bugs, the productive BWO emergence ceased the first week of November.

I finished working the run with no results. Then I followed Pablo's "snowclump" tracks..... 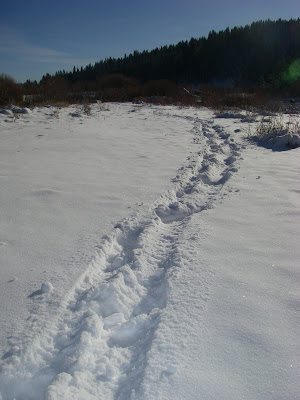 downstream to a known productive riffle/run. As I approached the area, I noticed a deep bow in Pablo's rod. He had "blind-fished' a known lie & subtle current seam adjacent a mid-stream boulder. He rose a nice 18" Brown that ate his #18 BWO Pullover dry. 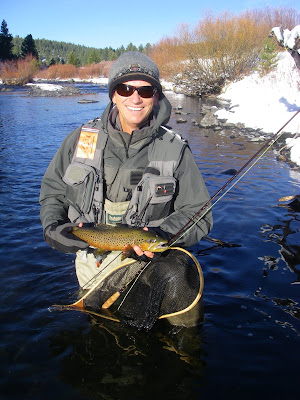 I've been pursuing this passion of ours for a long-time. For the last 26 years I've justified my addiction by being a professional fly fishing guide and instructor; AFTER 15 years of my initial submersion into the sport. What I know is what I've learned on my own; no steep-curve schooling, strictly by the "boot-strap". Nevertheless, I'm the first to admit that I'm a perpetual student and I'm always receptive to learning something new.

I feel I've been a reasonable addition to California's fly angling scene. I have established a positive reputation for honesty (sometimes too Frank!), reliability, trust-worthiness and competence; as a fly angler and guide/instructor. Until the mid-90's I never blew my own horn until someone told me, "...no one else will" after I ranted about the suddenly-on-the-scene "self-promoters". Some actually had/have substance & credibility & remain, others don't & fade from the scene quickly. I'm satisfied what I've accomplished. In time "paying your dues" will earn you respect and, surprisingly, unsolicited accolades from others, in print and other media.

In the winter '09 issue of Southwest Fly Fishing appears an article on the Truckee River; both the California and Nevada sides. I spent a day fly fishing with the author, Zack Thomas. He wanted some images and wanted to pick my brain relative to my take on fly fishing the Truckee river, on the California side. It is pretty-well written.

What amused me was that he actually quoted me...from an article I'd written about the Truckee River in the Spring 2002 issue of Northwest Fly Fishing. In addition, he mentions me as ...
a "top gun"...an "icon"... and a "renowned" guide.

I've been introduced during a radio interview as the "Dean of Guides in the Truckee Area" and as the "living legend" on a poster & mailer prior to a presentation. Recently, an angler I met while fishing said he was stoked because he met me astream; referring to me as a "heavyweight". Hmmmm, I hope he wasn't sublimally thinking about my current physical stature; having slowly become somewhat rotund as I age.

Guess what?
...I accept these accolades; I've earned it.

Recently I authored an article in the current Winter issue of Sierra Fisherman. Amazingly, I found myself plagerizing...myself!!...from a column I wrote for http://www.westfly.com/ in the late '90's.
Posted by Frank R. Pisciotta at 9:11 PM No comments: