It was the longest live, phone interview I've ever done...1-1/2 hours! I thank the show's producer, Roger Maves for the opportunity and fun experience.

Eventually, I'll annotate the numerous topics and questions discussed; giving the specific time of each segment.

"...they're on the Drakes"/Masking Hatch

I matter-of-factly said to an exasperated fly angler leaving the LT seemingly dejected. He was impressed with the numbers of PMD's present and the ocassional surface-swirling, feeding trout inhaling bugs at the surface. He explained that he went through his fly box and presented his full-range of PMD emerger and adults patterns..to no avail. He was befuddled, Admittedly, there are sparse numbers of Green Drakes flying around; the best count I had since their initial appearance a week early was seven; definitely not a blizzard... but...the trout were aware and on the look-out for these big mayflies....aggressively and confidently ingesting this wonder-bug. Believe me it is larger than the size 8-10 you'll find in fly bins. IMO, a #8 is a small one; I suggest a #6. 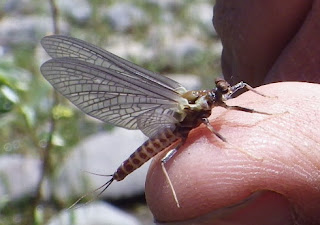 Well that was then and this is NOW!:

Currently, we're experiencing a classic "masking hatch".  Essentially the largest emerging aquatic bug is a Western Green Drake It IS "masking" the presence of smaller bugs; PMD's, BWO 's and smallish Watery Green Sedges. The  trout are showing a preference for the Pale Morning Duns.

Successful surface patterns are #16 PMD ParaDuns, Cripples and a flush-floating/in the film, Organza Spinner. While at the upper water-column, think of trailers also, such as a Partridge-Orange, Partridge/Yellow soft-hackles or a FBPT. If you prefer going down in the deeper runs and riffles; #20-22 Black Disco Midge, #18 FB WD-40 trailing a Green Drake or PMD nymph fraud are producing.

You figure the best times...I believe I've got the prime-time "dialed-in". 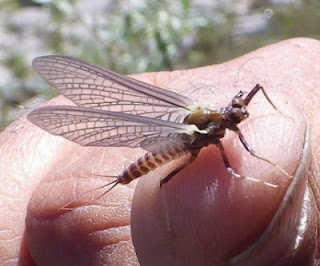 Posted by Frank R. Pisciotta at 9:49 PM No comments: