...Bring it on! Flows & water temps are near-perfect alignment... 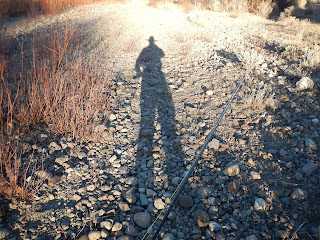 Posted by Frank R. Pisciotta at 4:20 PM No comments:

Progressively, as the Big Truckee and Little Truckee water flows become more "user friendly" there are likely crowds at these venues. If you want to avoid such; explore other regional waters within an hour's drive of the town of Truckee. You'll likely find some solitude at popular spots, venture way upstream or down and think about boats for difficult access. 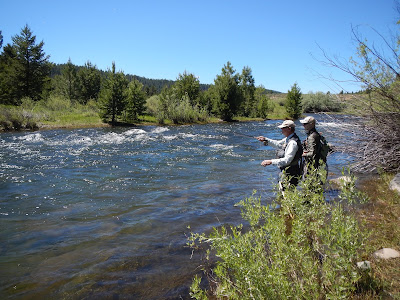 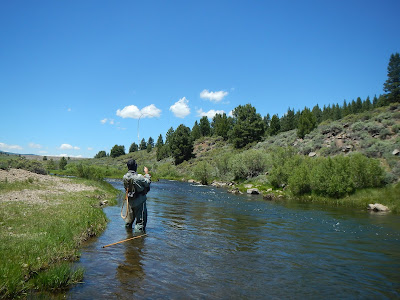 Even on well-known  waters one can find no other anglers...search 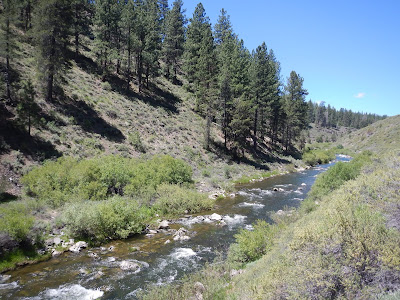 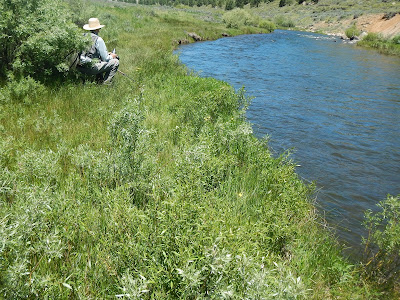 Waiting for the hatch...and heads

Posted by Frank R. Pisciotta at 9:02 PM No comments: 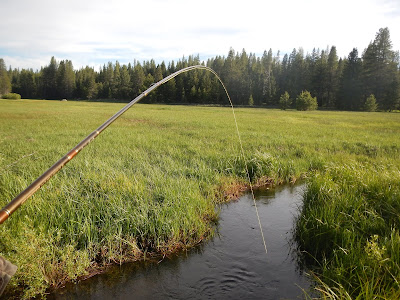 I love fly fishing small waters...been doing such for eons in the Truckee area. There are numerous  tiny brooks and creeks within a hour's drive of my home. Some are "secret"...others not. If new to the region study your topo-maps and start exploring. A few provide us the chance of bringing-to-hand the area's "Hat Trick"...brookies, rainbows and browns. In the near future Lahonton Cutthroat will be available; creating the area's unique "Grand Slam". A trophy is  in the 12"-13", most are 6"-10"...perfect quarry for a 3 weight rod...and dry flies.


There are important  considerations when seeking such waters. Below is an excerpt from my Destination Theater's presentation at Pleasnton CA's 2019 Fly Fishing Show: 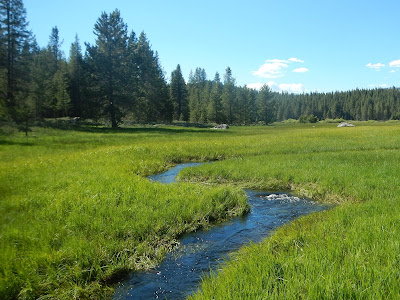 if there's water , there are trout 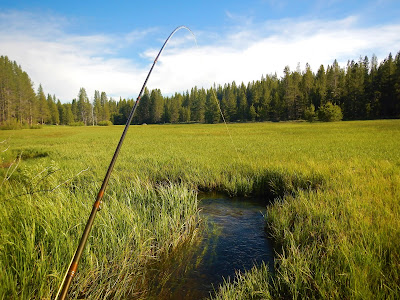 Your first cast is the most productive for these opportunistic feeders 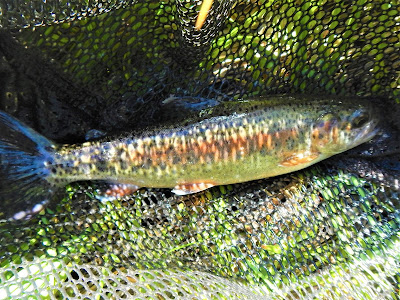 Above and below..."pan-size" or shall I say "hand-size" stream-bred trout 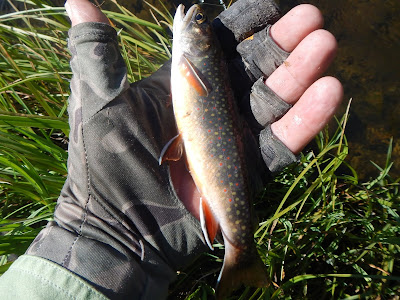 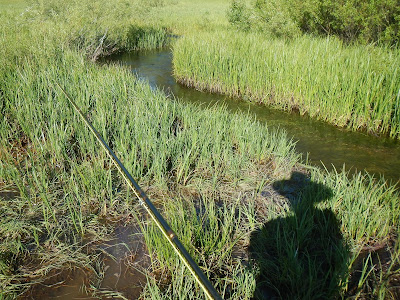 Posted by Frank R. Pisciotta at 4:17 AM No comments:

Lower Sac & A Near Death Experience? 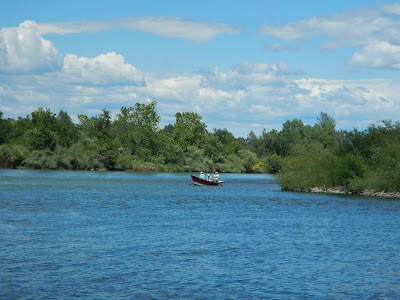 The Lower Sac...sort of reminded me of southern Chilean Patagonia
Recently, I've been spending some time fishing well-known tail-waters of the West; the Beaverhead,  BigHorn, Missouri and the Green in Flaming Gorge; the latter three being BIG, tail-waters, below really huge dams within sometimes wide and sometimes narrow terrain.  (see images at bottom).Then I realized we have a famed and productive tail-water in the Lower Sac; right in our proverbial "back-yard". 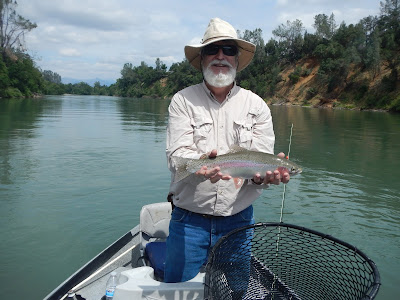 Mike Brugh with a typical LS RainBow
So recently I spent two fun-filled days drifting the Lower Sac with members of the local fly fishing group; Tahoe Truckee Fly Fishers. Suffice it to say; we netted respectable numbers of RainBows which made long runs, pulled hard and were healthy and strong. 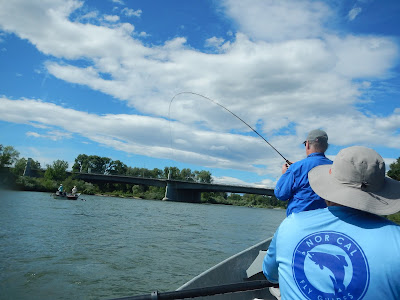 The LS is an "urban" fishery...along Interstate 5 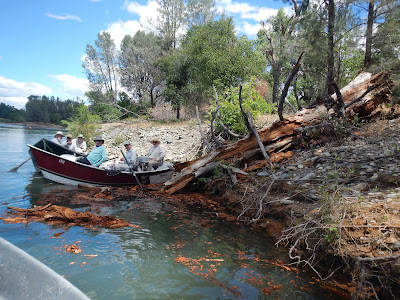 The fallen tree, right-side of image, just missed the drift-boat
Peter, the fella in the center of boat has new name, " Woody". The fella in the stern was brushed by the tree as it broke into pieces as it hit the port-side of the drift-boat.…really lucky nobody got seriously injured. We were up river around a bend and our guide Shane received a cell-call from Peter. The other boat in this image was drifting behind and saw the whole thing; seeing and hearing the tree falling and smashing on boat. 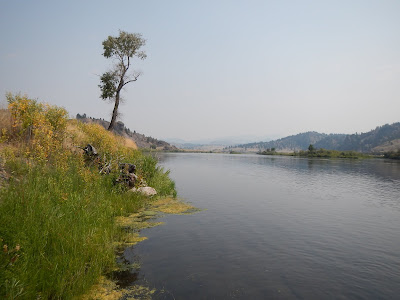 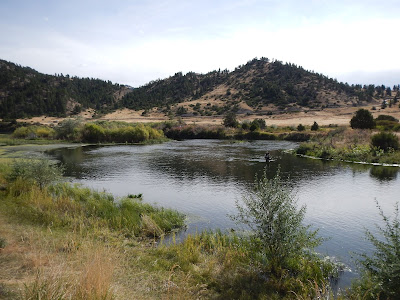 ...a wadable Missouri side channel 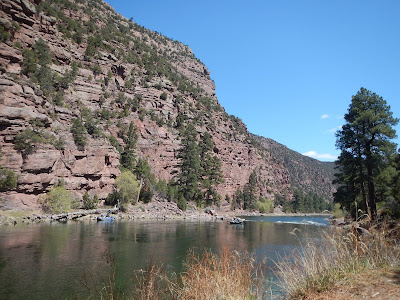 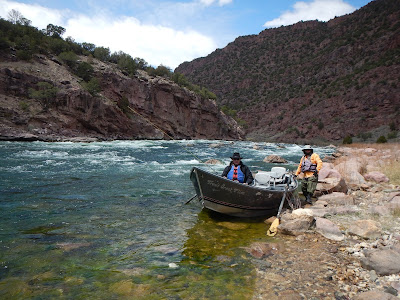 One of the few rapids on the Green  River 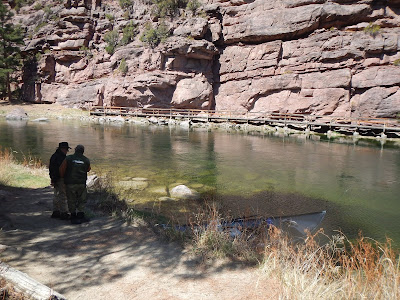 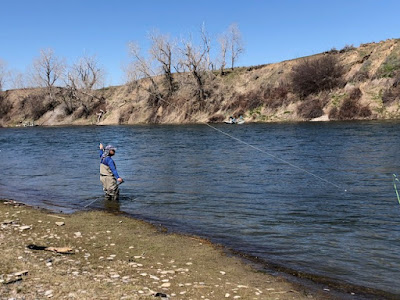 the BigHorn….with its ugly terrain 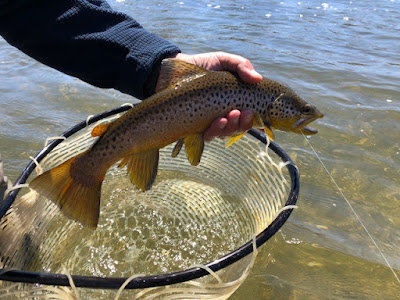 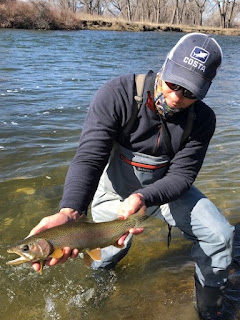 Posted by Frank R. Pisciotta at 1:52 PM No comments: 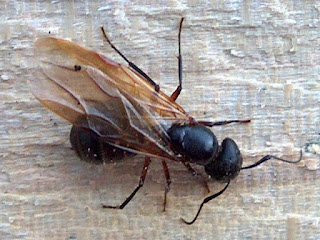 Today is my first sighting of the Flying, Black Carpenter Ants, one of the three infamous "Big Bugs of June". I didn't notice them yesterday on the LT. Now, we await the Green Drakes and Golden StoneFies on the BT to make their sparse and unpredictable appearance.

As for Truckee area's fly fishing. This is the opportune time to encounter a hefty river trout; not numbers, but quarry measured in pounds. Our second opportunity occurs at lake inlets in fall.

Well, we're experiencing still heavy flows on moving waters and the still-waters are at near-maximum pool; both water-types make for challenging conditions. It seemed the snow-melt/run-off was waning and then we had an uptick in with the melt this last week. There still remains a lot of snow at the higher, north-sloping mountain peaks. Prior to the increased river flows we had some mid/late-spring, dry fly action; BWO's and March Brown and the occasional terrestrial pattern. Both huge attractor/indicator flies to sparsely dressed, small emerger patterns all fooled the sighted surface-feeders. Netted trout were RainBows ranging from 12"-19". 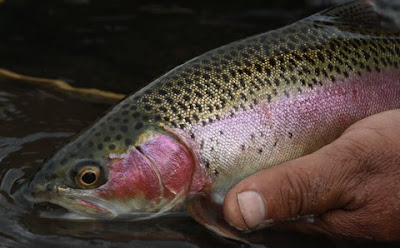 The BT is flowing high and clear in its upper reaches; 835-1920 cfs from Tahoe City to Prosser Creek's inflow. Below Boca dam, there is less clarity and it is raging at close to 3000cfs. All these flows are ideal for kayak and sturdy inflatable fans; less so for us fly anglers...but be patient. As for wading the river...forgetaboutit! Besides, no need to be in the water, the trout have dispersed to the stream-edges, avoiding the turbulence of the main flows; resting and preserving energy behind obstructions that create deep, quiet eddy water.

The productive techniques remain going deep, "low & slow" along the river-bottom. Suggested searching rigs adhere to the small/large concept; either a #12 San Juan or #6 Pat's Rubberlegs trailing a #16 FB Pheasant-Tail or Green rock Worm larva. I've no fly selections relative to Euro-style sub-surface fishing; if I did I'd be lying; being old-schooled in NorCal's tight-lining or high-sticking. 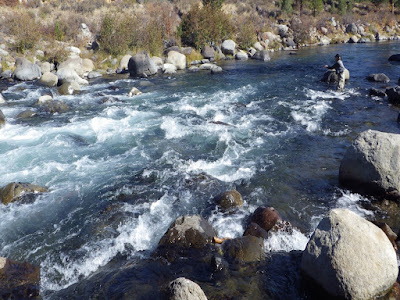 We're a MINMUM six weeks from the lower flow in the above image
Here are three FRANKISMS relative to angling during high water periods:

The LT below Stampede dam recently ramped-up to 760cfs; still too high for my jaded, liking.

If you are resolute fishing there, I suggest the same BT advice as above. The exception being a #8 Green Drake nymph for the anchor-fly and the trailer being a size #18-20, black or red midge larva pattern (off-set the hook!).

Posted by Frank R. Pisciotta at 6:59 PM No comments: