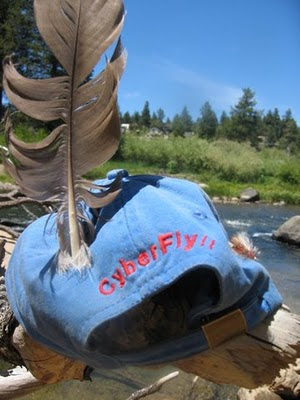 CyberFly!! is resurrecting the once famous Truckee Fly Angling Update because of requests of some of the "old-timers". It was e-mailed to a subscriber list of close to 500 recipients. It was started in '97 and ceased in late 2004...pre-blog era. I have a brief explanation of why I discontinued the factual fly fishing report on my 18th century web-site's homepage (http://www.cyberfly.com/)... and a click-on sample of one of my last entries.

The current version (below) is & will be faaaar shorter than the original, not as thorough & may or may not include its favored "Flora & Fauna Observations". Your feedback & personal reports are always appreciated & encouraged...so that others can tune-in to what you've experienced along what I'm reporting. Then, hopefully with your other additional comments this blog report may become timely & reliable advice for those planning a vist to the Truckee area. Uh...comments will be monitored for disparaging remarks or anyhing I disagree ;-)
Back to the Present:
It is officially Fall in the Truckee both visually & chronologically. The leaves are amber, gold & red...some are falling to the ground during brisk winds. The BT and LT are at low-flows; the exception being in the canyon below the Boca inflow. 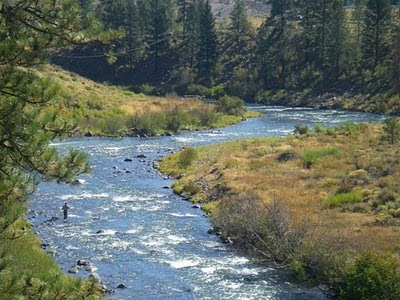 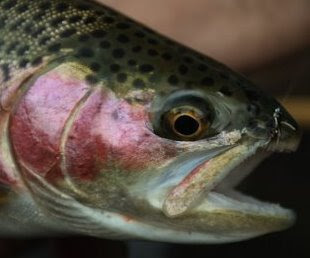 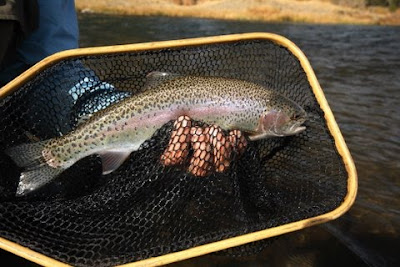 A brief 1-1/2 hour session on the LT resulted in a brightly-colored 10" brown which ate a #18 Olive ComParaDun. Several larger trout were rising...consistently, but failed to eat. The water level is at minumal flows of 37 cfs. A mild breeze was present. 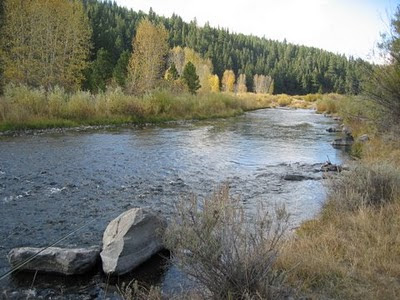 Posted by Frank R. Pisciotta at 4:59 PM No comments:

Current Fly Fishing Update:
Yesterday (Sunday, 19 September) we experienced really gusty wind, which made it difficult to cast; especially guiding/instructing beginners. The previous day a relative beginner hooked and landed trout...there was no wind. Bugs on both the BT and the LT were veeeery sparse; seeing both caddis & an occassional BWO. Water temps are comfortable for the trout's feeding metabolism...and they are eating...providing you can make the right presentation & the right fly. So, what else is new.
HINT: Locals are waiting for the big Fall Browns to gather, start moving and getting active. 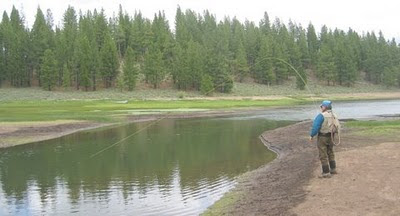 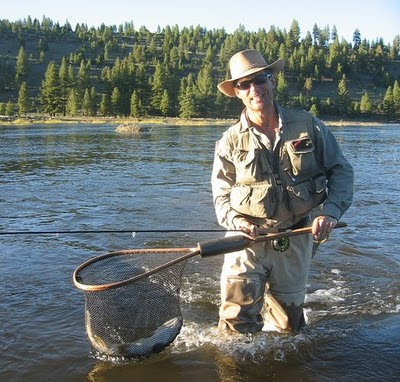 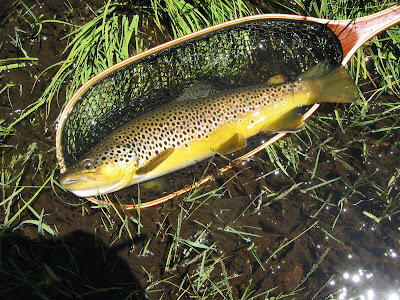 ...my requested advise-reply to a fella who will visit from Marin county later this week:

"Nice time to visit, the autumn colors are just starting to show and we’ve had a few morning frosts….Plus the crowds are gone!

Yes, for sure erratic flows on Little Truckee; being almost too low. There is lots of “gunk”, even when doing a dry/dropper. Trout are holding/congregating in the deep water only; so pick such water OR search the shallow riffles in the absence of showing fish. This past week (even with the low flows) clients have landed Browns to 19” (#18 Psycho Prince) and 6-8 Rainbows in the 16”-18” range. The latter being duped on dries as large as #12 SawMill Ants and small as #22 BWO Organza Spinners. There has been no really specific ideal time since we’ve hooked & netted trout as early as 8AM to 6PM. If I had to pick one time-frame I’d say 12-4PM. 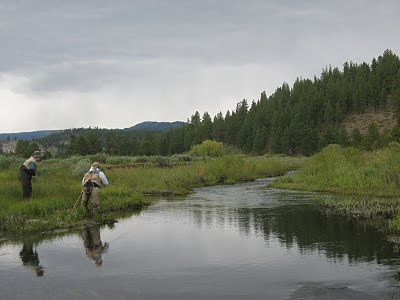 There has not been any consistent rises to bugs. We’ve been seeing very sporadic BWO in the 18-20 size and caddis from 12-18 range. There are tons of midges and the “surface-sippers” (the old SS; Nazi trout we call them) are leisurely ingesting them. A client said he actually saw a trout jump-out of the water after a low–flying dragon-fly…interesting, never thought about them…even knowing they are an effective top-water pattern in some lakes in Chilean Patagonia.

The big Truckee is now in really fine fishing shape. The water temps are ideal. We’ve been on the water as early as 8 AM; generally leaving about 1PM. Some bugs, nothing really notable and few rising trout. Largest trout this past week has been a 17” RainBow which ate a #16 Red Copper John. Other productive flies have been #14-16 Elk-Hair Caddis with smallish droppers such as #16-20 Rubber-Legged Copper-Johns in various hues. We hven’t netted any Browns. I can’t tell you what’s happening at dusk because I haven’t been there.

I’ve been “working” the lower Glenshire stretch (getting a bit too low) and preferring the venue between Boca inflow upstream to the Prosser creek inflow; there being about 200 cfs. Below Boca it is 500cfs; hence, for me, “combat-wading”. If you have the stamina and sure-footedness venture into the canyon below Hirschdale because the largest trout in the river are there. Best options would be indicator nymphing with generic big/small patterns...plus lead. 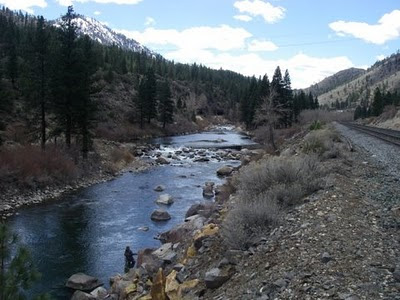 So far the Browns have not been gathering for the spawning rituals, but that can be occurring soon as we continue to get the cooling, early fall weather.

I am busy…today doing “administrative” stuff at home; then occupied with “work” to Sunday. Then, Tuesday the 21st, I leave Silver Creek and will return the 27th …for some personal fly-fishing (with my bamboo rod)…I’m getting a bit excited." 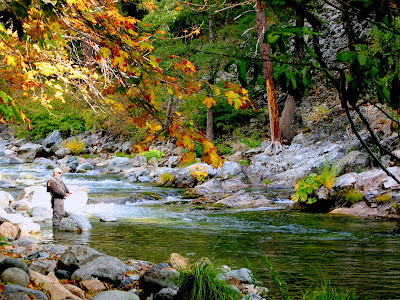 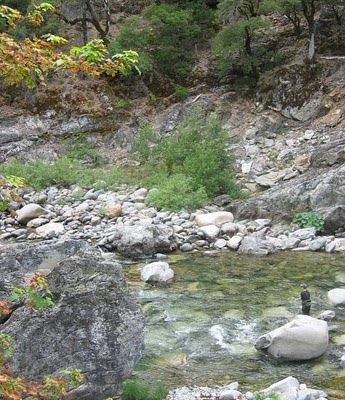 Fall is a wonderful time to visit the NFY. The weather is really pleasant; it is shirt-sleeve or light-fleece time...carry a packable wind/rain shell though. The water is low and absolute cystalline. It is no-hurry-up fly fishing; late mornings to late afternoon. "Prospecting"* with dry flies will produce feisty rainbows that aggressively inhale your #14-16 generic patterns.


During late-October evenings you'll witness flights of October Caddis...so a huge dry/small nymph dropper tandem is always a good ploy, even during the day. Best to look for shaded areas, aside rock-outcroppings and under stream-side vegetation if you do the daytime angling with the aforementioned rig. 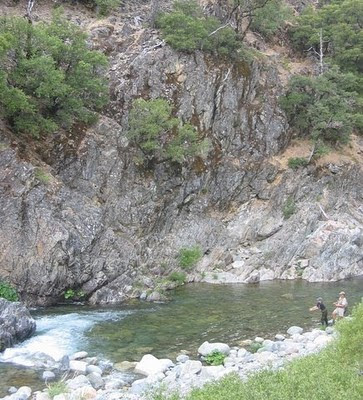 *Speaking of "prospecting".....placer gold-mining is now officially illegal on the NFY. As anglers we no longer have to be vigilant about stepping into deceptively deeeeeep dredging holes. Another up-side is not rolling an ankle-leg-bone-busting-boulder; having become unstable from suctioning-out its underpinnings. Also the dredging equipment, floating sluice boxes and 8" flexible suction hoses will not be anchored on the water. But, still be conscious of tripping over cables and lines strewn about the defunct mining claims....sometimes hidden amongst the stream vegatation & rocks. 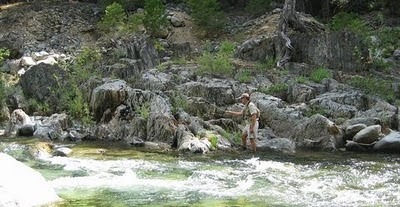 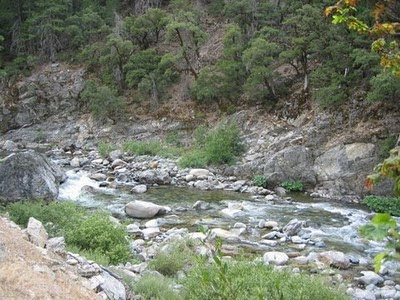