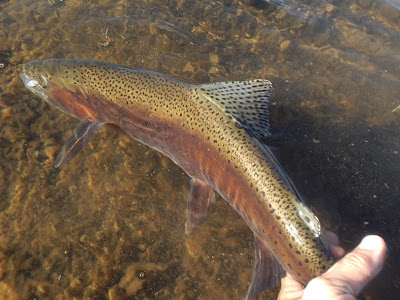 The recent snow-storms have been most welcomed.  Prior to, we were at 50% of historical average snow-pack to date; as of today it's been bumped-up to 63% of normal and at 67% water-content (was 43% on March 13th!).  Still low but an improvement. The storm-door seems to be open until the end of the month... Maybe we'll break the 70% mark. 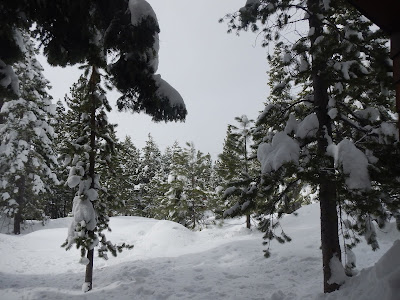 During the first "good dump" two weeks ago I got  4' of new snow at my place at 6500'. I'm guessing there had to be a minimum of 6'-7' of new "white gold" at the higher peaks. Wonderful for the forest and fisheries...not to mention skiing. Unfortunately for the latter, whether skiing or gliding, the north Tahoe resorts  are all closed...da VIRUS thing; of which I 'm not going to dwell upon here, remaining up-beat,  because I'm sure we're all pretty much  inundated with info with this troubling pandemic. Personally, I've been "self-isolating" and this has been my 15th straight day doing so; except for a couple of quick grocery and mail runs in town. 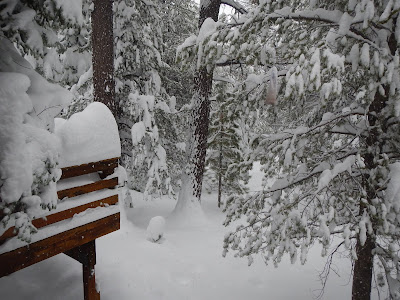 the calm AFTER the first good storm

So, I haven't been fishing recently. Prior to the snows, local intel had Skwalas present on the BT; Trout Creek to CA/NV state-line. There, be prepared for increased activity of  March Browns; sub-surface only. Because of the recent snows, access to the LT below the dam is improbable. If so, the angler will see some first-brood BWO emergences during mid-day; not to mention Midges in all life-cycles. Nevertheless, I'm not predicting you'll see a lot of surface-snouts.

Wintertime angling on the aforementioned waters has been allowed only since the 2008. Hence, both jaded "regulars" and Newbie/younger Truckee fly anglers are still leaning the nuances of the previously "closed season"; mid-November to end of April. Suffice it to say, the savvy anglers appear astream mid-day when the water is warmest; assuming there is decent solar-heating...say 11AM-4PM.

The amount of existing snow determines accessibility; for parking and trekking to the water, respectively. Some of us still strap-on snow-shoes, wanting to avoid a hyper-extension of the knee via unforeseen "post-holing". I lieu of felt-bottomed wading shoes, use plastic or rubber-soled wading shoes; the latter eliminates the nuisance of "snow-clumping". 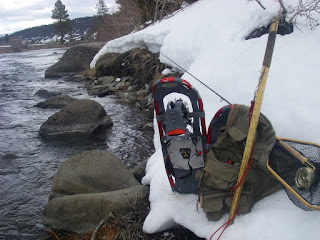 Early spring trout remain in the winter's low-flow holding lies...until the snow-melt commences. Prior to, fish the slow flow runs and the deep pools. There limited times for a chance of angling a surface fly.

For this transitional winter/spring period until the melt, the most productive ploy remains probing sub-surface; methodically, "low & slow". The trout will not move much to intercept your offering. Whichever "load &amp lob" method you use; be it high-sticking, indo-nymphing or "Euro" nymphing...get it  down! Our quarry are resting in bottom water-column, again, where you must naturally, drift your flies. I practice searching rigs; employing suggestive fly patterns; adjusting weight whether incorporated in the fly or on your terminal leader. If specifically targeting apex-predator trout; streamers are advised...the proverbial "Size-versus-Numbers" conundrum.

April, May and the start of June offer only "iffy" prime, fly fishing. Conditions are wholly dependent on what remains of the winter snow-pack, its  percentage of water content, and resulting melt and runoff during this period. Be aware the melt is unpredictable; being erratic or gradual; we never know. The most productive angling methods continue to be those of the winter months; present flies at the river's bottom, where the trout are.

Although we're 4 weeks away from the serious snow-melt; initially anticipate roily, high water and cold water temps. The largest trout caught in the Truckee area are in early spring and fall.

Lots of fly anglers prefer not fishing during this '"flush" period because there is limited holding water.  Flip it...to your advantage; the trout are isolated in fewer prime lies...target those areas! With high spring flows think...edges as in bank-side edges, slow, deep runs and quiet pools.  The trout will concentrate there. These trout are less pressured there, hence concentrated, because there are very few strategically-thinking anglers astream.

Here's another afer-thought for springtime from an October 3, 2012 blog entry. "Fly anglers and trout love weather & clouds". Although the thought was written relative fall-time angling it most certainly applies to early spring-time fly angling. Another recurring theme for me when guiding/instructing (...one of  my FRANKISMS) is "Fall and Spring are mirror images of each other relative to best time of day to fish".  Over my many years plying the Truckee area water, I have fond recollections of fishing over rising trout ingesting BWO's or early PMD  hatches...when it was drizzly and overcast.