This water-year is fueling a profuse wild flower explosion in the Truckee watershed basin. Thus far there has been 3-4 flowers I've never seen before. Below are a couple of images of a Camas Lily; a white one!?! I can only speculate that it is either an albino or rare mutation. If anyone can enlighten; I'm receptive. 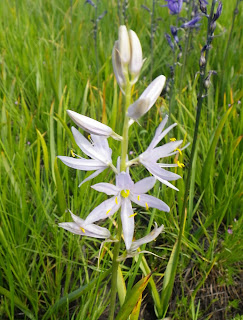 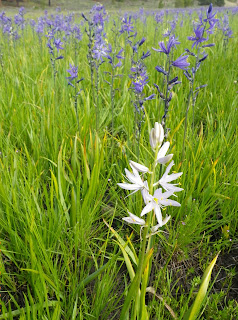 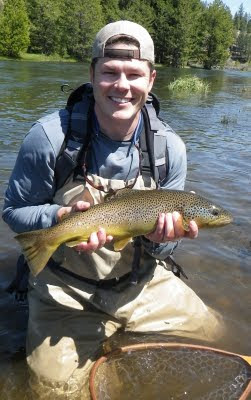 My 5/10 and 6/1 posts; PEAKING & TREND LINES and ADJUSTED PROGNOSIS...SLIGHTLY, respectively, declared that the snow-melt was waning. I was wrong...oh so wrong! My crystal-ball whose accuracy I was touting...sheepishly...was not.

June 6 marked the start of this warm spell. The BT started raging from a wadeable 300 cfs to over 1000cfs along West River street in Truckee. The historical average for this period in this area has been 250-300 cfs; hence we're currently at 740; flowing at 240% of normal. The LT is now at 831cfs in the special reg area; the highest I can recollect at this time of year. Regardless of these challenging conditions; trout are being hooked & netted. The caveat is that the trout hooked at these flows are difficult to bring to the net. I'm thinking if you net 50% of those fish hooked that you're doing OK. 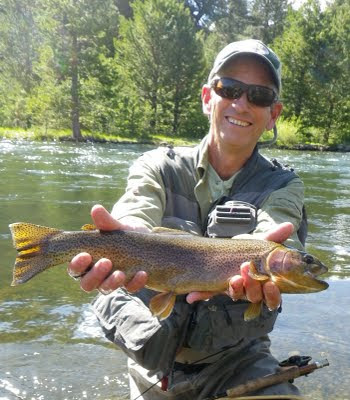 ...for a real, not arms extended image: 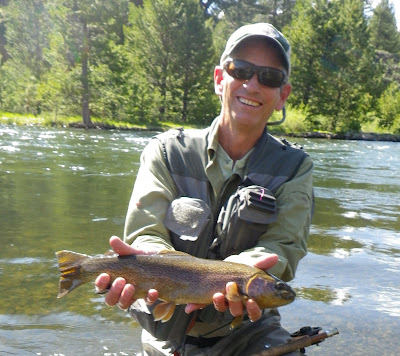 One accuracy on my predictions is that now we fly fish the small creeks, streams and lake inlets....HINT!
Posted by Frank R. Pisciotta at 11:18 AM 2 comments:

Who was the first California licensed fly fishing guide in the Tahoe area? What year?
Posted by Frank R. Pisciotta at 6:35 PM 5 comments:

Be on the Lookout!

...for the first Big Bugs of June. With this warming trend the Flying Black Ants will appear, and disappear, just as quickly. They can be on the menu for as little of 1-2 days to 10 days. Don't leave home without your favorite pattern in your fly box.
Posted by Frank R. Pisciotta at 9:40 AM No comments:

What with all this unpredictable weather; on Sunday I decided to venture off the mountain in search of Shad on the American River. Two days before the flows at Nimbus Dam were ramped-up from 5000 to 7000cfs. In reality I know diddlysqaut about shad fishing ; having done it only twice before. So I relied on the advice of Al that the flow increase could slow things down a bit & make the shad more difficult to locate. 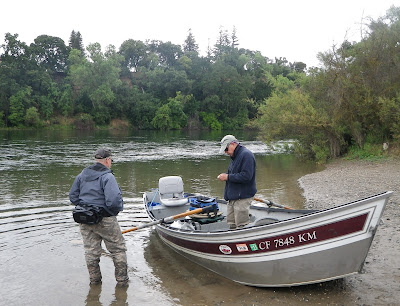 So I anticipated little in the way of fishing, but looked forward to visiting with a couple fly fishing buddies (we've been to Chilean Patagonia together)...catching-up with each others lives. I met Al Smatsky, who operates Excellent Adventures and Dan Mc Daniel (3-times president of the Northern California Council of the Federation of Fly Fishing) early in Sacramento and we went to the American river (I have not idea where the put-in was) 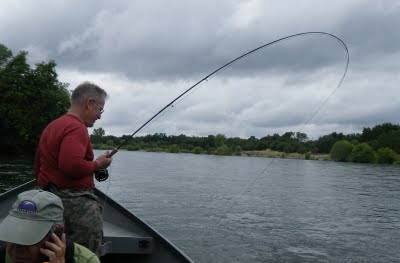 "Geez Al get-off the phone, I need a net job here!"
Action wasn't as torrid as what I've heard of shad fishing; but we were getting solid tugs and landing a few. The skies were overcast and there was an occassional drizzle, but very minor.

There were wild yellow irises throughout our drift. At lunch I chance to get close and admire them... 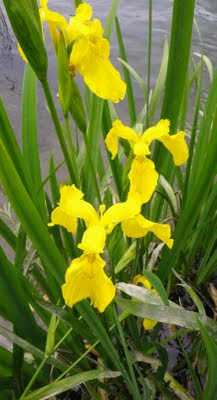 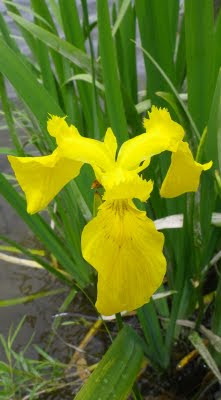 We were using 7 and 8 weight rods and casting 250-400 grain 30' heads; both integrated lines and shooting-heads with shooting lines. Regardless ro their samllish size the shad still put up strong struggles and good bends in th rods. 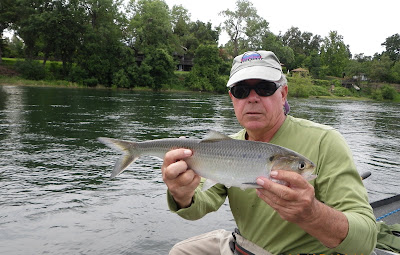 Posted by Frank R. Pisciotta at 7:34 PM No comments:

Come on....it just stopped snowing in Truckee! This endless winter is getting to be a bit too much. Here's a image of my back deck & forest. As I mention in my 4/20 post (Quickie E-Fishing Report VI); "...keep in mind that spring mountain weather is unpredictable"...yes indeed. 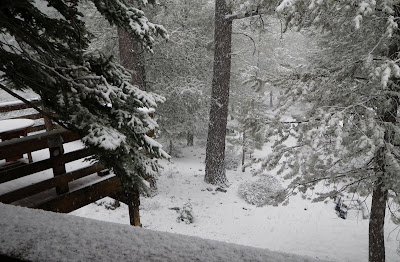 The locals have been out wetting a line and when the weather breaks a bit are finding fishable water & willing fish . This is the time of year is when we hook & net some hefty trout; not many but of quality . Fall is the other time we tag the larger trout.

Actually, my crystal-ball has been pretty accurate. In my May 10 entry, Peaking & Trend Lines I predicted that we were a "...MINIMUM of 3 weeks out" for settling and improved fly fishing conditions. The flow trend-line remains steadily downward; so we're "...definitely in a waning period." relative to snow-melt.

This current blow may retard my previous predictions...not much...say one more week, so now let's say good times are as close as next week on the BT. Behind town and downstream to the Prosser Creek inflow; currently the flows are a manageable 346-360 cfs. near my preferred bench-march for wade-fishing of 300 cfs. The further upstream to Tahoe City, the less turbulent the flows; 68 cfs being released from the lake at Tahoe City. Below Prosser the flows are near 600 cfs and way too heavy below Boca inflow at 1450 cfs. The major caveat now is WATER TEMPERATURES; still below 50 degrees, we need a few up-ticks above that number for prime-time.
Per April 7th's More Snow?!!...Seasonal Prognosis; "Expect the hatches to be compressed and intense...but later than normal...late year for the BT...negatively impact the fishery (read:crowds) on the LT...BT big boys & girls will not be stung for a long while...down deep...plus is that the smaller streams will be fishable for an extended amount of time..." This latter excerpt was written close to two months ago and it still seems accurate. I guess my crystal-ball is functioning properly.