Question:
How many pioneers where in the infamous Donner Party during the winter of 1847/48?
Posted by Frank R. Pisciotta at 1:55 PM 4 comments:

...been snowing in Truckee area since late yesterday (Tuesday). March may be going-out like a lion. I've received 7-8 inches at my 6500' home. The new "white gold" is extremely heavy which translates to more water for the trout.

I would not venture here until we get some mild weather; melt being a major caveat. The run-off will raise & color the BT below the town of Truckee. As it proceeds downstream it will progressively get higher and discolored. 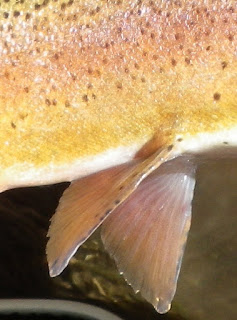 If you must wet a line use flashy streamers or deep nymphing in the flat/slow water. In the "canyon" you might get lucky and cast to risers; slashing floating Skwala adults or bulging on emerging BWO...as occurred two days ago. Overall best times, regardless of method, is noon to 3:30 PM. 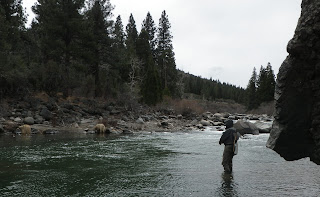 Deep in the "canyon' casting to surface-feeders
PS....go to www.sierrafisherman.com and view the Spring 2012 issue. There on page 10 is the Pro-Tip feature. The theme is "Spring's High-Water Tactics". Some good stuff there
Posted by Frank R. Pisciotta at 11:35 AM 1 comment:

First let me say I personally am not into competitive fly angling. Nevertheless, last week-end (March10-11) I was at the Western Regionals of the US Fly Fishing Team in Reno. I was to be a "controller" (judge/scorer) but upon my arrival the the organizers had enough volunteers. So, I free-lanced at the different "beats" merely observing and assisting as needed. Overall it was interesting and informative.

I decided on going per request of my long-time buddy and fellow-guide in the Truckee Guide NetWork,  JR...aka...the Leader. He moved to Colorado two years ago so it was a nice opportunity to catch-up with each other. Most important I provided some moral support. He has been a competitor for at least 10 years in fly angling competitons. Initally he competed in the OutDoor Network and ESPN events. He has competed to be a member of the US Fly Fishing Team for the last 5-6 years. He hasn't made the touring team YET...but I'm confident he is on the cusp of doing so soon. 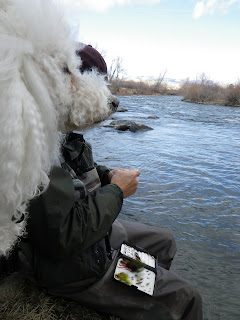 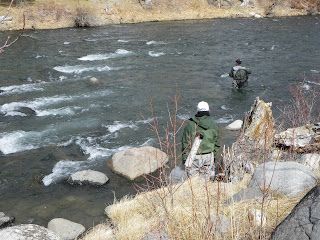 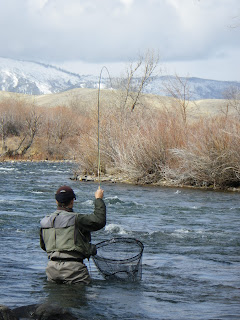 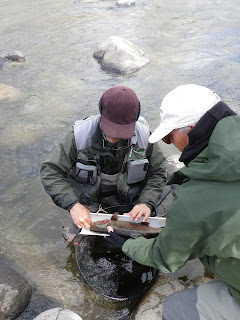 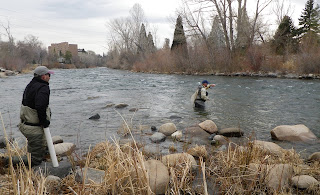 Doug and Koop...da judge in the middle of Reno 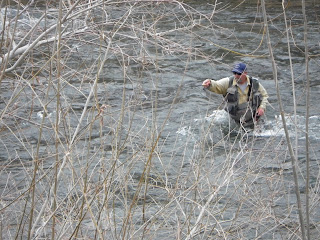 Doug high-sticking. Some rules were 1) no lead on the line (in the fly only), 2) no egg patterns, 3) seperation between the flies off the main line had to be a minimum of 20" and 4) no indicators such as yarn or Thingamabobers, "hot-tips" excepted...


There were 28 competitors during the two day event. Each day 2 groups of seven fly fished either Pyramid Lake or the Truckee River in Nevada. Simply, Pyramid provided the least "scoring" opportunities while the Truckee had provided more hook-ups & nets. The river provided Rainbows mostly in the 17"-21" range; largest was 23". Everything was measured in centimeters so I'll let you interpolate. The largest scored Cutthroat at Pyramid was 24"; it was netted on Sunday my Mikey Weir making him one of the five who qualified to move onto  the US finals in Bend Oregon later this year.
Today it was brought to my attention that a Nevada fly fishing guide was either accusing or implying that the competitors were fishing over spawning trout. It is true that there were pre-spawn, spawning and post-spawn trout in the river while the competition was on. I haven't seen the post and will look for it on Face Book.
In the interim, and being a devil's advocate, if the rant or implication is true I'm saying that both the competitors and the judges were informed that doing such was stricly VERBOTIM. Any type of egg pattern or bead was forbidden...period. I attended both the competitor and judges pre-contest meetings. If a judge even suspected that a competitor was fishing on a redd, he was to informed the angler not to do so. If a trout was brought to the "controller" for official measurement and the angler was suspected fishing a redd spawn; it simply was not counted as a score and the competitor was warned.
Posted by Frank R. Pisciotta at 10:01 PM No comments:

.....Simply, we need more snow/water for the trout.
As of right now  prime fly fishing conditions on the BT will be at least 5-6 weeks ahead of a "normal" season; of which May is "iffy" and June is definitively the latest end of the run-off/melt (in a normal winter) and the first start of Prime-Time. So, look for late April thru May exhibiting "normal" June conditions. It remains to be seen when the START of the sequence of hatches will occur. Currently emergences of BWO's, March Browns and Skwalas are more numerous across the border in Nevada. Expect these bugs to progressively work their way into California and into the Truckee River above the "Grand Canyon of the Truckee".

A couple of days ago some surface feeders were seen/hooked (11:45 AM-1:45 PM) on a #18 BWO Thorax Dun. Regardless of were you fish, nymphing with a good-sized, #6-10 Stonefly Nymph and trailing a #16-18 FlashBack PT is a very good ploy and your chance at more numerous hook-ups...into late afternoon. 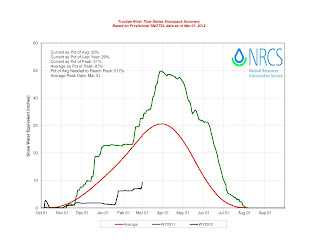 In case you can't read the fine print; the Black line is the % of average amount of water content as of 3/1, Red is the historical average of water content and Green the amount that occurred during the winter of 2010-11.
In the Truckee River Basin we're currently at 38% of Snow-Water Content...which is more important than the depth of the snow*. To date we've received  50% of normal Percipitation. This data is the average from eight (8) measurement sites at elevations from as low as 6456' (Independence Creek) to the highest site of 8801' at Mt Rose...which is included in the "Basin" report.

Here's something interesting which I've never thought about: