...in Nevada. Finally, the extended period of snow-fall has ceased. There is talk that this will be a "top-3" year. The snow-pack around Truckee is waaaay above normal for this time of year; still limiting access severely on both the BT and LT. Yesterday Pancho and I ventured across the border into Nevada. Succinctly, 3 hook-ups, one break-off and ZERO lands during a 1-1/2 session from 3:15-4:45 PM. We experienced clear skies, sun and no wind with water-temp at 46 degrees, relatively low flows and great clarity. We came upon a run that had "bulging" surface-feeders. Skwalas, BWO and midges were emerging...sparsely. The hook-ups were on the stoneflies; two at the surface and one below. Still another 2 weeks for things to get going in the immediate Truckee area. Remember, water-temps will be a determining factor....not to mention clarity & volume of flows.
Posted by Frank R. Pisciotta at 1:27 PM 4 comments:

As for fly fishing in the immediate Truckee area...it is wishful thinking. We received heavy snow yesterday (Sunday, March 20) and the minimal access points that were available on both the BT and LT are officially declared closed by CyberFly!! 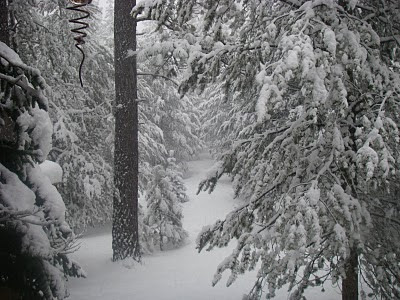 The grapevine has this season's snowfall as the heaviest in 25 years. My recollection is that the most famous recorded snow-falls to date were the winters of '51, 83 and '92.

Suddenly the sky has cleared & the sun is peaking through. I'm sure it is a temporary aberration because there are forecasts for the next 5-6 days of snow! Is there such a notion as TOO MUCH SNOW...from a fly angling perspective?

Basin-wide average is now at 147% of normal...good stuff! I haven't even mentioned water-content, which is more critical than snow-pack as it relates to run-off/melt and our precious fly fishing. Let's assume a minimum of 130% of normal water-content (which is a conservative guess), thus 147 X 1.30=191% of average water-content. Hey, we may not be able to see our first consistent dry fly fishing until the end of July...at the earliest. Sub-surface fishing this year will account for 99.9% of the trout fooled...a very liberal guess.

Today I've seen two images of a bobcat. The first was on da Sheriff of the Canyon's blog (http://www.gilligansguideservice.blogspot.com/) and the second was in today's Sierra Sun newspaper (http://www.sierrasun.com/). So, I had to share my "bobcat" image in the blogisphere. 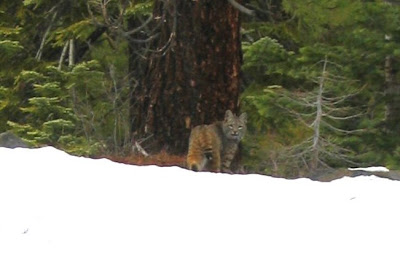 For those who have never observed a bobcat in the wild; it is an exhilarating experience. They are reclusive & seldom seen. I was here in Truckee for about 20 years when I saw my first one along the "West Loop" of the Truckee river.

The one imaged above was seen "up close & personal". Three, late winter-early springs ago I was in my living room and heard a loud thump* coming from our back deck. I turned a saw this magnificent animal, on its haunches on my deck rail. It was almost robotic in that it was slowing rotating its head side-to-side. It was not more than 10 feet from my window. My camera was readily available. I grabed it and went to the patio door, hoping that he/she was still there, it wasn't. It was slowly walking up a snow-patch off our deck with its back to me. I hissed and it turned around &...I clicked the camera.

Thus far I haven't seen a mountain lion up here in the mountains. They are around because last year one was sighted about a 1/2 mile from my home and tracks were identified about a 1/4 mile away. If my heart was pumping when I saw the bobcat...I hope I don't pass-out when I seen lion in close.

* I later attributed the loud thump to the probability that the bobcat attempted to ambush (from a close-in tree) a squirrel or chipmuck that are frequent visitors since I live on the edge of the forest.
Posted by Frank R. Pisciotta at 2:59 PM 8 comments: 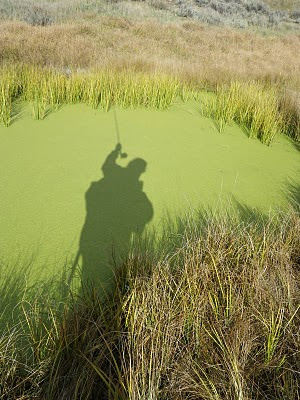 
It is 7 PM...new "daylight-saving-time", and we're receiving a steady fall of heavy-wet snow. Before we gradually settle into early spring we can use a few good wintry-blasts to pad the recorded, March 1 water-content of 124% of normal for this region. Jeez, if we can get the figure above 130+% of normal water-content...the trout will be appreciative. This is wet/sleet/snow pattern is predicted for the next 5-6 days. Bring it on!

This post was to occur about two weeks ago. At that time I'd just finished a busy 6-week run of three shows and venturing to Chilean Patagonia. Then the unexpected occurred; severe water-damage from a failing fixture at my "labor-of-love" cabin in Truckee; built in 1979. It has occupied the last 10 days of my life. Now I'm resigned to getting screwed by the insurance company. They will "depreciate" a 30 year-old carpet and padding. They'll subtract that $$$ figure from the replacement of a new carpet. I'll probably owe them money!!!
So, what do the current weather-patterns suggest to us fly anglers? Here's my take:
Access is, and will continue to be of concern for the next 2-3 weeks. More of a factor in the BT 's upper-river with more ingress points downstream as one proceeds down the canyon to the state-line. For sure everything is open in Nevada.
A "low & slow" mind-set with a tandem big-fly/small-fly rig (I think light/dark also) will get more tight-lines than hoping for the rarer near the surface taker. If the latter, think in the surface-film or slightly below; there might be a stillborn or crippled BWO or March Brown, midge, winter black stone or Skwala adrift. If the latter scenario is your choice, then go at mid-days, hope for little or no wind, lots of solar heating (read sparse cloud-cover) Prospect/target eddies, flats or light-velocity runs.
An excerpt from "Early Season on the Truckee" which I authored n the 2009 spring issue of Sierra Fisherman:
"...Early in the year there are sparse surface emergences. You will observe the ubiquitous, little, black winter stones peppering the snow banks and flitting above/on the water surface; midges, March Browns, first-brood BWO...Skwala hatch. Don’t hold your breath anticipating many, if any, of these bugs getting eaten on top…"
So, wait until early June when the "Big Bugs of June" make an appearance. 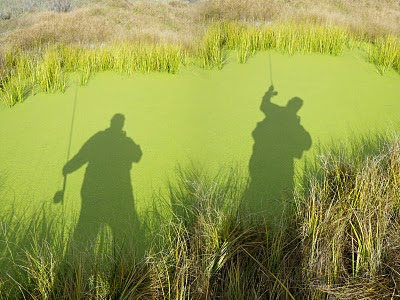