Question # 8:
What do these "snow" hieroglyphics mean? 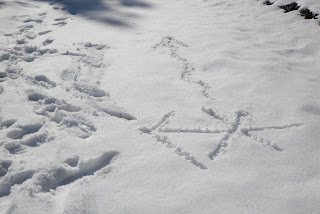 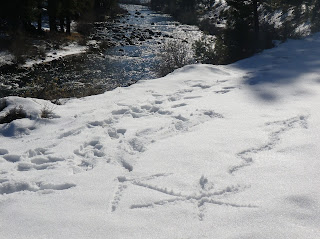 Back deck of my place during the front-end of the recent snows
Well, finally after 3  weeks into 2012 we finally have received significant snow! The fish need it. Now I'm into my winter-hibernation mode and I don't mind it because the local economy and the trout needed the percipitation.
As for the 49ers...the old ABC Wide World of Sports program said it well in its intro:
"The Exhileration of Victory and the Agony of Defeat!" Enough said from this life long '9er fan.
"White gold" is what fuels the  Lake Tahoe economy...winter, spring, summer and fall. December to the 3rd week of Janurary we witnessed  blue skies, scattered clouds and normally light breezes. Air temperatures had been in the high 40's to mid-50's in the Truckee area. So, winter outdoor activities were a bit limited. Prior to the most recent snowfall, a ski patrol buddy says that skiers had to ski to on the "snow islands".  Locals adjusted and participated in an extended period of biking, hiking, jogging duck-hunting and...fly fishing. 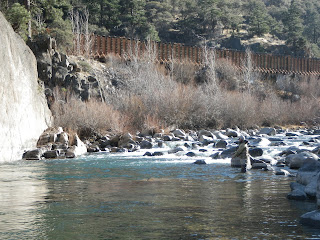 BT near the CA/NV border
We experienced one of the better Fall fly fishing seasons in quite a few years on both the BT and LT . I’m speculating it was the result of the bountiful water we received during the previous winter.
About the 3nd  week of December the fly fishing in the area definitely sloooed-down. Granted, access to the waters was still open, but the really cold weather and early AM air-temps were in the high-single-digits to teens afforded optimum fly fishing times a very narrow window; 10:30 am - 2:30 pm. Hoped-for preferred conditions were scattered clouds as opposed to clear azure skies without…and this was a key…very little wind. When the winds started, the wind-chill factor came into play. If, even during sunny days, the winds appeared,  it became very uncomfortable. Obviously proper winter clothing helped, but it still wasn’t pleasant.

BT produced RB’s to 17”; most were wild in the 8”-11” range. I'm talking in the upper river above the Boca inflow to Trout Creek; having received "grapevine" reports of heftier 2-5 pounders in the "canyon" to the stateline. The water was really cold(and remains); 38-42 degrees. The fish were/are not moving and you had to hit them on the head. Productive flies are #18 Olive Micro-Mays and BHFBPT, #16 Rubber-Legged Copper John and Olive Bird's Nests trailing a # 14 Flesh Juan....under an indicator with 5-6 # 4 shot. Only dry fly hooked fish was on a #14 Elk Hair, in the upper stretches via  dry/drop rig. There were /are few bugs in flight and an absence of consistently rising trout. 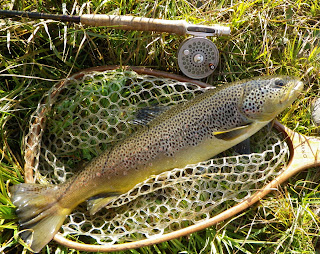 The LT had the most consistent, rising trout during noon to 2:30. There were sippers that moved to sized 22-24 Organza Spinners, #20 Olive,Thorax-No-Hackles and FlashBack WD-40's. The water was really low at 40-44 cfs so nymphing was limited to a few selcted runs. Late December into January we were hooking and netting both Browns and Rainbows to 20 inches. In Fall, Browns to 23" and RainBows in the 12"-20" range were encountered; mostly indicator-nymphing and eating various-colored San Juans, Eggs and sized 20-22 dark midge larva and pupa. 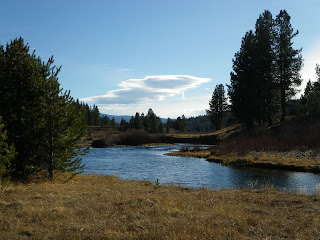 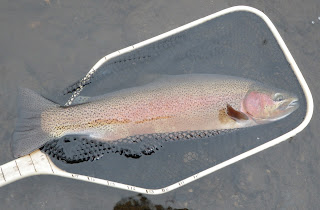 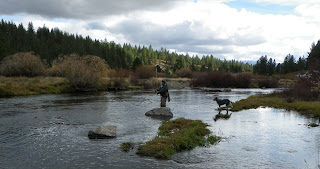 Posted by Frank R. Pisciotta at 6:37 PM No comments:

Question #7:
What Truckee River Watershed body of water has been nominated
to Congress for "Wild & Scenic" status?
Posted by Frank R. Pisciotta at 7:15 PM 2 comments:

My opinion is that proper stream manners amongst anglers should simply be "...do unto others as you would have them do unto you."...the Golden Rule. I'm often amazed at the lack of stream etiquette displayed on a trout stream. I'm speaking wade-fishing; that is what I mostly do. Yes, I do drift-fish; but that is generally with guides that I hire...that is another topic entirely.
Here are are some consensus generalities:

2-If two anglers are fishing in the same direction and side of the stream and one of them is moving faster than the other; the faster angler should loop around the slower angler and proceed fishing a reasonable distance away. IMO, 50 yards is a minimum, but, ideally out-of-sight of the other is better; providing it is at the minimum distance.

3-If someone sitting aside the stream and not actively fly fishing; DO NOT assume they are not fishing. They can be changing flies, observing a rising trout or untangling their leader. Also, it is poor manners to assume that you can fish on an opposite bank. If in doubt merely ask.

1-I believe that 90% of anglers who display poor stream etiquette are unaware of stream manners. If appropriate and there is an opportunity, diplomatically educate. The remaining 10% are consciously violating good stream manners; they're trying to beat you to a fish or crowd you because they want to fish the area you're fishing; they are "gaming" you. It is your decision how you deal with these jerks you will occasionally meet on the water.

2-Etiquette is subject to the venue. For instance, California's special regulation waters on both Hot Creek and Hat Creek have different standards relative to spacing amongst the anglers than the Little Truckee. At the former two creeks; it is generally accepted to be just outside the casting-range of others. At the Little Truckee a minimum of 50 yards spacing is the established distance between anglers amongst the regular visitors.