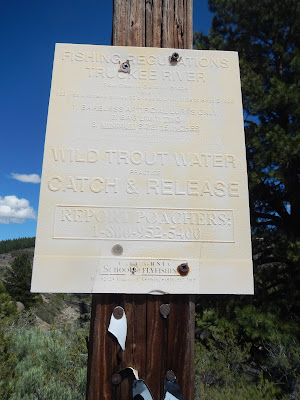 
Above is an image of a rare, still posted, washed-out Truckee River regulation sign; circa 1985 or 1986.  It was a "second-generation" Truckee regulation sign graciously produced and posted by Ralph & Lisa Cutter; during their early, active days of their well-known  California School of FlyFishing.


The first special regulations on the Truckee were instituted, I believe in 1982. A couple of years later, 1984, the first BT regulations were printed and posted by members of newly the formed Tahoe-Truckee Fly Fishers. They were printed, laminated, stapled on ply-wood, and then encased in chicken-wire. Then we heavily screwed them in, high-up via ladders, into the trunks of the local evergreens along the river. Us TTFF members attempted to make the signs as "bomb-proof" as possible since there was resistance locally for these "elitist",  C & R regulations. A couple of the first-generation reg signs are still present along the river...washed-out and illegible...similar to Ralph and Lisa's signs.