Both March and April have been wonderful months for snow and the trout needed it!

To date the Truckee River basin has experienced 72% of normal snowfall;
ranging from 54%-87% depending on which of the (8) measurement sites.
Water content is only 52% of normal; ranging from 31%-67%.
Currently we're in the midst of an earlier than normal snow-melt.

So...overall I'm predicting angling prime conditions will be a
minimum 3 to a maximum of5 weeks "earlier" than normal. .
This assessment is based on my intuitive sense of 30+ years of fly angling in the
Truckee area.
For the next 3-5 weeks…water temperatures and flows in the moving waters are important considerations.  Fly anglers should target lakes and/or the smaller running waters.  11AM- 3PM will be your best time-slot…so sleep-in.

Here's my thinking... Throughout May your best chances will be lake inlets and small creeks and streams.  The Big Truckee (BT) and the Little Truckee (LT) will feature few consistently showing trout; go deep for best success.  During the first week of June the first chance at surface action on the main river occurs with the appearance of the Big Bugs of June… Flying Carpenter Ants, Golden Stones & western Green Drakes, in that sequence.  At the end of the month the Little Truckee’s Pale Morning Duns will start to pop. “Prime-time” throughout the entire basin will be early June to mid- August…expect lots of caddis.  Mid-August through September will feature the area’s two most “technical”, special regulation waters, the Little Truckee & Milton Lake; a great time to hone your skills. Decent prospects on the BT will be below the Boca inflow because of it’s cool releases and those of Prosser dam.  We’ll experience fall’s solitude, low & clear water while casting  to very selective surface-feeders gulping mayfly and midges down to size 26; the exception being imitations of the humongous-sized 6-8 October Caddis.

Last Thursday The TRUCKEE RIVER peaked at 1100 cfs along West river Stree; now ranging from 400 to a high of 600 cfs in the late afternoon. Jaded fly anglers are who unfamiliar with this waterway are befuddled with their marginal success during the early season. If they’d taken a water temperature (…a stream thermometer is not a gadget to look trendy on your vest…use it!), their disappointment would be explained. Snow-melt translates to super cool flows in the low-mid-40’s.  Simply, cold water equals lethargic Truckee trout.  Such temps can be OK for the creeks or Little Truckee, not the BT. This early in the season it is wishful thinking that you’ll take ,trout on/near the surface. Probe the depths with your nymph, or larval pattern, methodically; hit the trout on the snout, force-feed them. Right now they are not inclined to move much for your offering because their feeding metabolism is “slow”. They will ingest your fly subtly, if you’re asleep, they’ll spit it out swiftly & you’ve missed the hook-up. Streamers or flashy Bucktails are also effective now; especially in the heavier flow & turbid water.  These takes will be more dramatic; likely invoking an aggressive, territorial ambush. 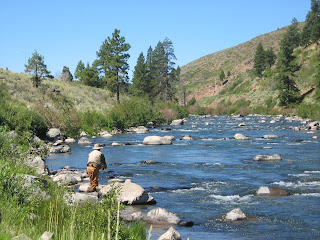 Suggested Tactics: 1) locate moderately flowing, 3’-4’, sun-dappled runs or tail-out of pools, near the bottom, mend/swing or a “stutter-strip” a streamer on 10’ sink-tip; imitating the pre-dominate forage fish, the Paiute Sculpin…a ConeHead, Kiwi-Muddler is a good fly because of its weight & undulating rabbit-fur strip 2) high-stick a #6-10 Golden StoneFly nymph in the  “seams” or “creases” of fast/slow currents created by the break of a mid-stream boulder, 3) do not by-pass eddies & swirls along the bank 4) think “slow &; low”, 5) double your trouble with a two-fly rig; personally my favorite search tandem is a #10 Foster’s Legged, Turkey Bead Head & a #14-16 Chartreuse Copper John.  5) OK, for you die-hard surface addicts; skate a large, gaudily-colored, hair fly (…a Waller Walker!?!) in slicks & spill-outs of pocket-water…a proven technique suggested to me by Ralph Cutter years ago..

The LITTLE TRUCKEE RIVER at its headwaters below Webber Lake in the Perazzo Meadows area is worth an exploratory venture starting mid-May.  Here it is a natural flowing stream. unchanged by man-made intrusions as in the “Wild Trout” waters below Stampede Dam. If your timing is right, it can be very rewarding. 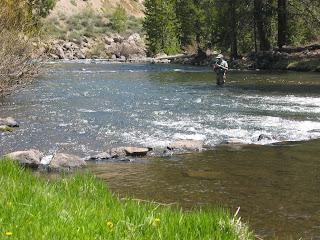 Your flyangling in “Wild Trout” reach between Stampede dam and Boca lake can be affected by erratic flow releases.  If not, the streams most consistent early-season fishing will be at the Boca inlet & lower “canyon” water.  Initially, sub-surface angling will be the producing strategy. Anticipate the most consistent rise activity and steady surface feeders at the end of June and throughout July…PMD’s, midges and Little Western Watery Green Sedges. HINT: water temps, assuming sunny skies, are always several degrees higher than the middle or upper meadow stretch.

MARTIS LAKE simply is a shadow of its legendary fly angling of the '80's to mid-'90'. Historicallyit  fished well during the early season to mid-July's Damsel hatch...then slowed until fall-time. For us die-hards, here is one’s strategy of the glory days…whether applicable today remains anyone’s guess. 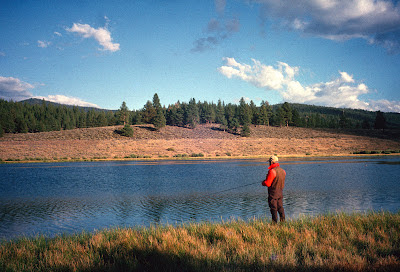 During the mornings, prior to the heavier gusts of wind & when the surface is smooth and/or a slight ripple; don’t be fooled by perceived on the surface feeders; emerger frauds, use dark-colored midge pupae patterns, sized 18-20, in or under the rubbery meniscus will elicit more grabs.  As the wind-induced surface chop appears, go to your sinking-lines.  Here are three suggested tactics for your sub-surface search: 1) fast-stripping a baitfish imitation, a 6 or 8 Olive Krystal-Flash ‘Bugger is effective, 2) mimic a predatory, dragonfly nymph with long, slow pulls, interspersed with 6”-10” spurts.  The B.C. classic, a Doc Spratley or a Brook’s Assam Dragon are good choices in size 8, and 3) hand-twist retrieves mimicking chironomid larva or twitches with a #14 Flash-Back Pheasant Tail. Use the former along the bottom & the latter amongst the developing weed beds or shoreline shallows.  At dusk, look for the lake’s infamous Blood Midge adult or emerger being slurped at/in the surface veneer.

MILTON LAKE historically does not produce well until late June. IMO July is the best month.  Three ideas to ponder: 1) it is a frigid, tail water impoundment; not conducive to long periods of float-tubing; pontoon boats; prams are ideal, 2) it is not advised for those untested in the “technical”` nuances of still waters; terminal-gear & tactics-wise, 3) it is far from maddening, summer crowds in Truckee & Lake Tahoe.  I will not mention this magical fishery for the remainder of the 2012 season. 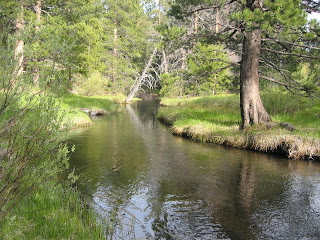 Early season is always an ideal time searching for a SMALL CREEK or STREAM “diamond in the rough.” Initially, they’ll be frigid, too swift & murky in the afternoons.  Then, you’ll encounter the right flows, but, still too cold. Finally, you’ll discover ideal flows & water temps.  Being on the scene of this latter prime “window of opportunity”, can afford you one of the ultimate pleasures of High Sierra angling and you’ll be close to your mechanical steed.  HINT: The “window” is open, 10-+ days…catch it while you can.

When snow-laden tree branches, limbs and ground brush vigorously unload and quickly spring-upward as the snow melts-off from the heat of the sun.
Posted by Frank R. Pisciotta at 7:24 PM No comments:

Yes indeed it was a decent March...not a "miracle" but the trout will take it.Below is "...nothing but da facts mam.." as of April 2