A Happy New Year to One & All!!
Steelheading seems to be a matter timing; relying heavily on climatic conditions. Of course, a given assumption is that the fish are in the river; ideally in good numbers. 2007's, now legendary, incredible steelhead numbers was not a likely probability; four of us hooked 75 and landed 50. This year we had been receiving varied reports of success (...or non- success). Rain was needed to move/spread-out the ironheads.

This year's annual trip looked very promising for our intrepid group of four; Lob-Dude, da Hell Yeah Kid, Yo Joe! and myself. As luck would have it; rain was projected for the first two days of the three days we were going to drift; December 15, 16 & 17. I do not mind rain; as long as it is mild & falling softly. We again stayed at the River Haven Cottage in Lewiston; the river being in our backyard.
I've become a pansy-arsed, "fair-weather" steelheader. A wet deluge or snow-blizzard...no way! We experienced the latter in 2005; steady sleet & snow...all day. In addition to the uncomfortable conditions; the angling was a bit difficult. During that one miserable day two of us hooked three and netted one (some say that is a "normal")....the other boat did the same. That was enough for this kid; I vowed that weather would not interfere again; an unreasonable attitude because we make long-range, advanced planning.
Last year, 2008, during the third week of November; our first two guided days resulted in all of one steelhead amongst the four of us. On the third day, the guides felt sorry for us.
OR, they felt pressured to produce. Believe me, I've been there during my 26 years as a trout fly fishing; I call it "sphincter-tightening time" So, during the third day we ventured way down river to the inflow of the South Fork to Willow Creek. There we caught numerous 1/2 pounders and tussled with 20-25 Chinook salmon. We really enjoyed the battles (...or shall I say being tugged around the river); not landing any of them being under-gunned with 7 weight rods.
...Back to 2009's trip
Well...during our three days floating the river we hooked 28 and netted 14 (six of which were wild) They ranged from a "small-adult" sized 22" to 27" being the largest. Most steelies were in the "cookie-cutter" 24"-26" range. 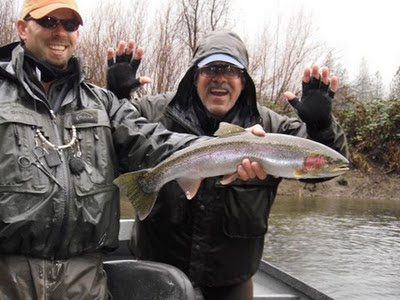 Suffice it to say that I was exuberant upon boating this "small-adult"...been a awhile. I'm sure Brian (the guide) felt the same. 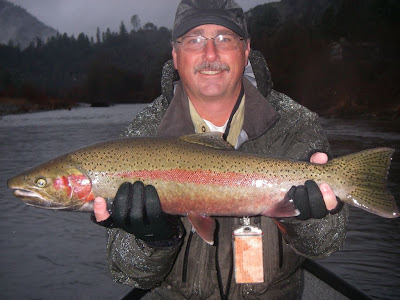 The Hell Yeah Kid with the largest netted steelhead...several larger ones uncorked 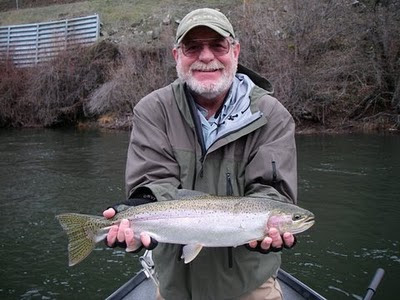 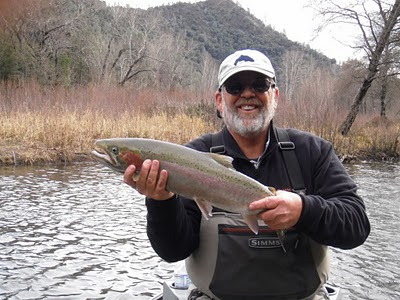 Yo Joe! with a wild buck

…I lost two “good” ones 26”+..one on pilot error (…a nano-second of slack; can get way with trout but definitely not these ocean-going trout…making quick forceful moves); the second on a “thump-thump” flash, deep in the water column shoing a very deep girth. Brian Balog, the guide(highly recommended...if you can get him being that he's booked waaaay in advance) guessed a minimum of 8 pounds and into 10.

Blown-out. Not a single, “legit” SH netted. Best was a 16” half-pounder. HYK landed 3 browns to 17” on egg patterns…other three of us, ZERO-takes…all day. Rain was lighter than previous day, but fell constantly until about 1 PM…it then ceased.

We gambled on the lower river because of less boats….although clearer water. We rolled the dice because when we got to the launch-site; we had about 2-2-1/2 feet of visibility….flow was at 1000cfs; day before being 450cfs.

At 5PM at the upper parking area of the LT as we prepared to leave...warming our rigs...Doug da Physicist told me the air temps from his SUV device said 23 degrees. He did a quick rule-of-thumb figuring 15+-mph gusty winds we experienced in the meadow...MINUS 2 degrees! Well, I'm not surprised................

During the 4+ hour session Doug hooked two and landed one. The netted RainBow was taped at 18". It ate a #20 Red Midge Larva. The small fly amazed Doug. Prior to that landed fish; Doug had a prolonged struggle with a RB that was easily larger. I guesstimated 20" minimum; viewing its body-contortions while positioning myself for the "net-job".

A Season Winding Down & Annoucements

We're anticpating a series of snow falls starting Sunday. It will add to the existing snow-pack. Access to the big Truckee (BT) & Little Truckee (LT) and other local waters wil become limited. The season is winding down...

Now my focus is on the upcoming "off-season" activities. Early on, December 12-18, I'll be on the Trinity River, in search of the Big Tug (da tug is da drug!) of a Steelhead. This is the 5th year of our group of four; we rent a cabin in Lewiston and hire drift-guides for three days.
Then (late January to mid-February), I'll make my annual trek to the southern hemisphere's Chilean Patagonia...what else!...fly fishing in a very remote area of the world. I'll be there from 1/29-2/14 2010. There is no one within a 25 mile radius of the lodge (http://www.picacholodge.com/); except us six anglers, three guides, the owner/manager, handy-man and cook/house-keeper. Think of joining me in 2011. Also get on my e-list for announcements on Chile and other "hosted" fly- angling adventures I'm planning...at a "deal you can't refuse".
...Spam it is!

I'll be in the Sierra Fisherman magazine's booth at the San Mateo's ISE show (January 14-17, 2010). On the Friday & Saturday, the 15th and 16th, I'll be part of a seminar/presentation on fly fishing the northern Sierra. During 26-28 February 2010, I'll share a booth with my compatriots in the Truckee Guide NetWork at the Pleasanton Fly Fishing Show. We'll also be in the Presentation Theater with the updated (...some fabulous new images!) "Fly Fishing Opportunities in the Tahoe-Truckee Area".
I'll be posting on the aforementioned happenings. As is said..."stay tuned".
Posted by Frank R. Pisciotta at 11:30 PM No comments: