Suddenly...we need more snow! I should have shut my mouth in conversations noting La Nina's tendency for minimal snow in January & February after strong Decembers. We have not had a significant snow-fall for going on 4 weeks. 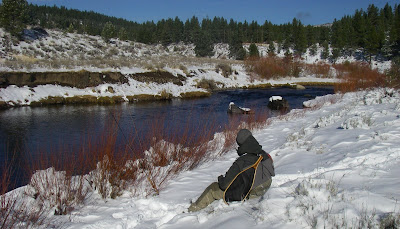 Admittedly we've experienced some beautiful , sunny days though. The upside is that the fly fishing has been productive and very accessible, most especially on the BT. Dead-drifting a small/big tandem, some lead, under an indicator is my personal preference right now.

I like doing 'shows" whether in a booth, giving a presentation or involved in a seminar. I'll be involved in the following:
1---Sacramento ISE, 21-23 January
Two seminars entitled "Fly Fishing the Sierra",
ORVIS booth and helping with "Fly Fishing 101"
.....off to Chilean Patagonia 2-14 February, maybe this time I'll post images and a report
2---Pasadena Fly Fishing Show, 19-20 February
in the Sierra Fisherman booth and will talk at the
Destination Theater
3---Pleasanton Fly Fishing Show, 25-27 February
similar to Pasadena I'll make a presentation in the
Destination Theater; Truckee Guide NetWork booth
If at any of the three events, please come-by and say hello. I like placing names with faces.
Below are images of the last 'group"event I attended; October's Truckee River Day. I attended the Little Truckee Project and later the 'fair"along highway 89. The huge, colorful trout was an inflatable "bounce-room" for the kids. 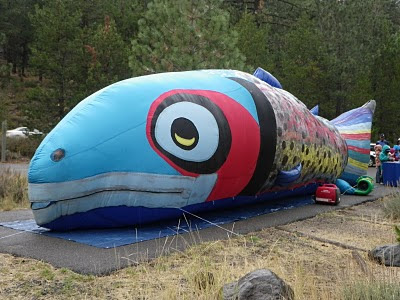 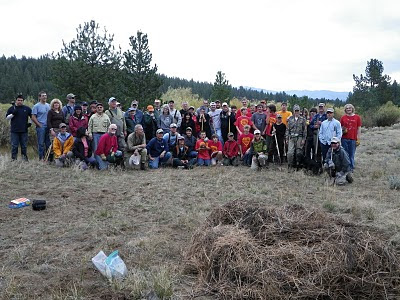 ...such as now! During the next week we'll experience pleasant weather which will afford the fly fisher an opportune time to do some mid-day fly angling in the Truckee area. The BT is more accessible than the LT...Today was a perfect day (home image below); no wind, sun and & wispy clouds. 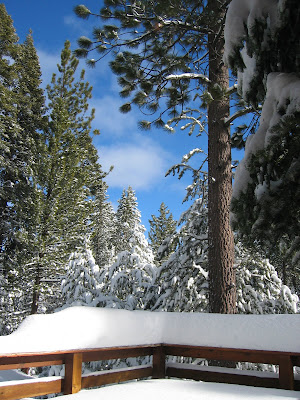 My intent was to meet Pancho on the main Truckee. It was an intended respite from the "shack nasties" that can afflict us mountain dwellers. It didn't happen because of an unforeseen minor injury to my wife while skiing...a chipped tooth. When I finally arrived at the rendezvous-point on the river...late in the day...I didn't wader-up. Pancho had just finished a very satisfying session. He landed three (3) upper-teen Browns and lost a larger Rainbow on an aerial at the end of a strong surge across the river. All four hook-ups where under an indicator, some shot and a, promised, undisclosed fly.

If you visit, strap-on you snow-shoes & test the "warmer"waters...you may be surprised. 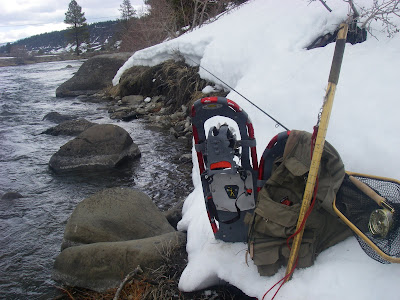 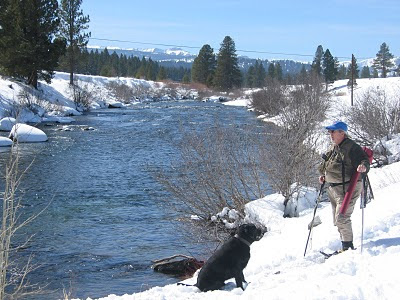 Here's an excerpt from an article I authored for the Spring 2009 issue of Sierra Fisherman magazine; entitled "Early Season on the Truckee River":

"During winter and spring, California’s Truckee river is fly fished like most freestone streams in the California. Water flow and water temperature are the key factors governing strategy; and why fly anglers adjust tactics accordingly. For consistent success; simply, fish…“low & slow”. For surface addicts; wait as springtime wanes into summer; there will be an occasional, although limited, opportunity to feed that jones.
"If accessing the river during January, February and March (snow-shoes are a good idea); go at mid-day seeking warmer water exposed to solar heating. You’ll find warmth in “soft water”, mild currents, edges and eddies. During May to mid-June; ideal conditions may still be an “iffy” proposition; wholly dependent on the snow-melt. Your best ploy remains the earlier months’ tactics of stripping streamers or a preferred technique with a tandem, big/small fly rig deep in the deep runs, troughs and pools and in the lower-water column of eddies in boulder-strewn pocket-waters.
Early in the year there are sparse surface emergences. You will observe the ubiquitous, little, black winter stones peppering the snow banks and flitting above/on the water surface; midges, March Browns, first-brood BWO, and thus far, an unconfirmed Skwala hatch. Don’t hold your breath anticipating many, if any, of these bugs getting eaten on top…"

In my previous post I forgot to show why we love the snow & the life-giving elixir it provides our watery friends...the trout. 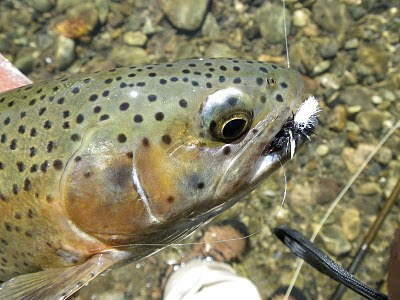 Snow-wise we've experienced a phenominal month of December. If you feel "...a winter-wonderland" is a hackneyed expression, your're probably right, but, it sure is beautiful here in the mountains. Since Thanksgiving both locals and visitors have been frollicking in the "white-gold"; skiing, gliding or snow-shoeing. 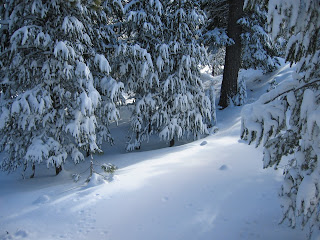 Excerpt from the local 12/29 210 Sierra Sun newapaper:
"The early winter storms have brought the Lake Tahoe Basin's snowpack to 219 percent of average...already received 70 percent of our annual snowfall, and technically were just entering the winter.
Over at Squaw Valley USA...over 21 feet of snowfall this season...120-130 inches is traditionally high snow count for this time of year...best snow conditions in more than a decade." 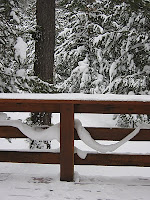 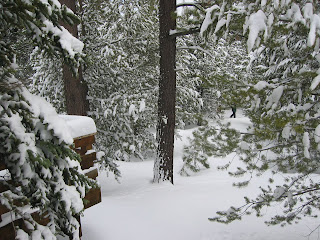